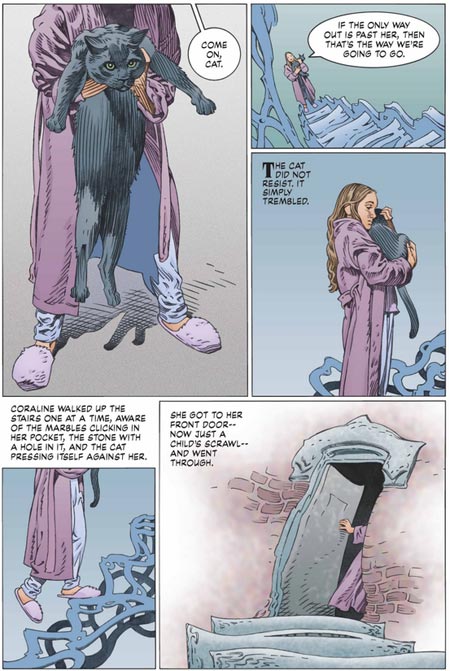 Since the jolt of receiving my Coraline Mystery Box I’ve been understandably curious about the upcoming animated movie, and equally frustrated that I can’t yet find a significant repository of Coraline concept art (though I did come across some very early concept drawings here).

I’ve also noticed that the Coraline movie web site is now active, with a nicely responsive Flash interface and lots of stuff to explore and download; and the ASFIA-Hollywood Animation Archive has added a few more Coraline Mystery Boxes to its tally.

In the meanwhile, I’ve been happily feeding my Coraline fascination with the excellent graphic novel adaptation of Neil Gaiman’s novel by veteran comics artist P. Craig Russell, which Santa, and/or my stepdaughter, brought me for Christmas.

The book is a hardback, a bit smaller in aspect than typical American comic size, but certainly big enough to give the art a good sized canvas. It’s also worth noting that the book, at almost 200 pages and consisting of a complete story, can be correctly called a “graphic novel”; as opposed to the constant misuse of that term by the mainstream comic companies to apply to the last six issues of some superhero comic slapped into a square binding.

Russell is no stranger to working with Gaiman’s material, Coraline is his fifth collaboration (including a stint as my favorite artist for Sandman), and he is currently adapting Gaiman’s The Dream Hunters as a graphic story. When HarperCollins originally proposed a graphic novel adaptation to Gaiman, he immediately asked that it be done by Russell.

Russell’s adaptation of Coraline was begun prior to the release of visual concepts for the movie and is free of the influence of the film. This is a Good Thing; not that the movie doesn’t look great, everything I’ve seen from it looks amazing; I’m just glad the graphic story is an independent artist’s interpretation of the novel and not part of a “movie package”.

Russell’s vision of the story is more straightforward than the highly stylized character designs featured in the film, with a realistic representation of Coraline, her parents and the other major characters; giving it more of the feeling one might conjure up on one’s own mind when reading the prose version.

Russell’s elegant linework, refined draftsmanship and keen sense of design are well suited to the story and its setting, and he seems to take particular delight in his portrayal of the old house and its surrounds.

Lovern Kindzierski contributes restrained and effective color to the artwork, Todd Kline adds nice touches to the lettering and the entire package is very satisfying, almost like a deliciously dark children’s picture book for adults.

There are some pages you can see on Gaiman’s site (from which the image above is taken, also here) and a couple bits of art (and here) on Russell’s site. There is an interview with Russell on Newsarama.

The HarperCollins site has a page devoted to the Coraline Graphic Novel; and both that site and Neil Gaiman’s Mouse Circus page have a Browse Inside link that takes you to a preview that is almost 40 pages long (large and long enough to get you reading and hooked on the story – clever).

Addendum: P. Craig Russell has begun a series of video talks on graphic storytelling on the PCR TV site. In the first installment, he talks about story openings, using his graphic story adaptation of Pelléas & Mélisande as an example. New segments will be added weekly on Mondays.

One Reply to “Coraline Graphic Novel”