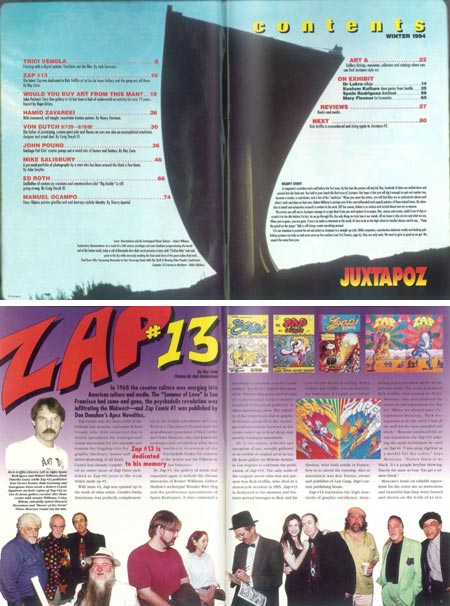 The magazine was started by Robert Williams, who was at one time an assistant to Ed, “Big Daddy” Roth. Williams was also a pioneering underground cartoonist (one of my favorites) and contributor to the original Zap Comix with Robert Crumb and the gang, and is currently a “pop surrealist” painter.

Juxtapoz has actually been going since 1994 (surprised me to realize that), The magazine has an active online presence and has recently been putting full archives of its early issues online. They are now up to issue #10.

The first issue (images above) contains articles about issue #13 of Zap Comix (which was sort of a reunion issue, that sadly also marked the loss of pioneering west coast artist Rick Griffin, and was dedicated to his memory), as well as articles on Big Daddy Roth himself (who many, myself included, consider the “daddy” of this particular branch of pop culture and art), along with articles on Von Dutch, John Pound and others, and includes a Spain Rodriguez sketchbook.

The subsequent Juxtapoz archive issues are a cornucopia of thumbs-against-the-eyeballs lowbrow art, which some people find irresistibly fascinating and others find unconscionably revulsive. A word to the wary.

Personally, I find myself in between those extremes, apparently a rare occurrence. As much as I love the original cultural and artistic streams from which lowbrow art and/or pop surrealism stem (specifically true Surrealism, Dada, early 1960’s Kalifornia Kustom Kar Kulture and late-60’s underground comix), I run lukewarm on the contemporary artists who take their inspiration from that vein, with a few exceptions.

It seems like most of them are trying way too hard to be outrageous or disconcerting; and for all of that the art never has the ferocious life that those originals had, particularly against the backdrop of the restrictive mainstream cultures they so gleefully disturbed.

Nonetheless, Juztapoz does feature work that is fascinating and well worth the attention; provided, of course, that you have the inclination to take the ride through that particular funhouse.

Note: Both the site and the magazine archives should be considered NSFW and not suitable for children.