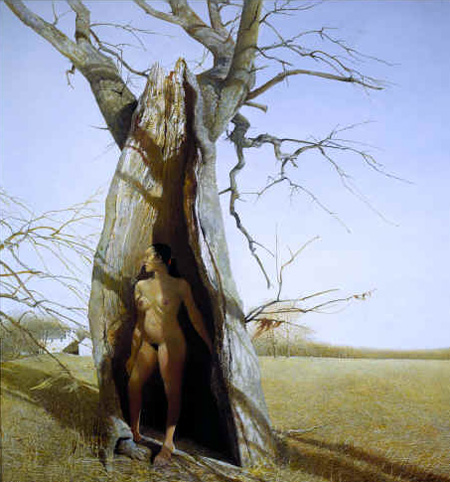 Andrew Wyeth, an American realist painter who in some ways epitomized the conflict between late 20th Century Modernism and the Realist tradition, died today in his sleep in his home in Chadds Ford, Pennsylvania at the age of 91.

Wyeth was the son of the great American illustrator N.C. Wyeth. Those familiar with the elder Wyeth’s work will know that he cast a mighty big shadow. Son Andrew, one of five children, differentiated himself from his father by working in watercolor and tempera instead of oil, replacing his father’s bold colors with a subdued, almost suppressed palette, and emphasizing texture in place of color.

His quiet depictions of the Brandywine Valley countryside and the area around the family’s summer home in Maine, along with his often melancholy portrayals of residents of those areas, made him prominent as one of the public’s most admired American artists in the 20th Century.

Of course that very popularity, and the simple matter of his realist (though sometimes surreal) subject matter, and traditionalist technique, made him a target for derision among modernist critics, who denigrated classical traditions with a vengeance during their time of dominating the art world. Though his early watercolors were well received, and Christina’s World was purchased by the Museum of Modern Art, the modernists eventually felt the need to tear him down. They hurled at Wyeth the intended insult of calling him a “mere illustrator”, as though there were no more vehement way to say “not an artist”, and in the process, of course, belittling his father’s accomplishments.

Wyeth quietly persisted in the face of the post-war Modernist tides, and continued his pursuit of contemplative scenes, keen observation and command of the somewhat arcane techniques of egg tempera, a demanding and difficult to master medium that predates oil painting by centuries.

It didn’t hurt, of course, that Wyeth’s paintings were in demand and sold for high figures during the artist’s lifetime (a relatively rare thing in the history of art); and he became one of the best known American artists ever, eclipsing his father’s fame from previous generations. Wyeth eventually had the last laugh, as a good deal critical attention eventually came into line the popular acclaim after the Modernist wave had crashed and the fab foam began receding under the currents of the return of traditional artistic values.

I personally run hot and cold on Andrew Wyeth’s work, finding less appeal in his major tempera paintings than in his intimate and informal watercolors and drawings, particularly those of the Brandywine Valley, near where I grew up. Wyeth at his best was a keen eye and a careful observer, letting nature guide his hand. His figure paintings and drawings almost always included something of the countryside, or the rustic buildings and interiors associated with it, as an integral co-subject, more than simply a backdrop.

The painting above, Dryad, painted in 2000 (more detail and info here), reverses that situation; in a way sublimating the figure and nominal subject of the painting, model Senna Moore, to Wyeth’s intensely focused rendering of a great oak on his Chadds Ford property that had been split open by lightning.

Admittedly, I have trouble viewing Andrew Wyeth without making comparisons with his father. Because of the high regard I have for his work, N.C. Wyeth is my favorite illustrator and one of my favorite painters in general, it’s a difficult and probably unfair comparison.

If you want to see Andrew Wyeth’s work in the context of his artistic family, the Brandywine River Museum, near his home in Chadds Ford, Pennsylvania, has a terrific collection of work by Andrew, his artistically inclined sisters, his son, Jamie, also a noted artist, and, of course, his father, N.C. Wyeth. (If anyone puts the lie to the phrase “mere illustration”, it’s N.C. Wyeth, who was to my mind one of the finest American painters, period.)

There is also a nice, and inexpensive, book that puts the three generations of Wyeth’s, N.C., Andrew and Jamie, in one volume, An American Vision: Three Generations of Wyeth Art: N.C. Wyeth, Andrew Wyeth, James Wyeth.

Addendum: Katherine Tyrrell has an extensive Squidoo Lens of information and resources relating to Andrew Wyeth.