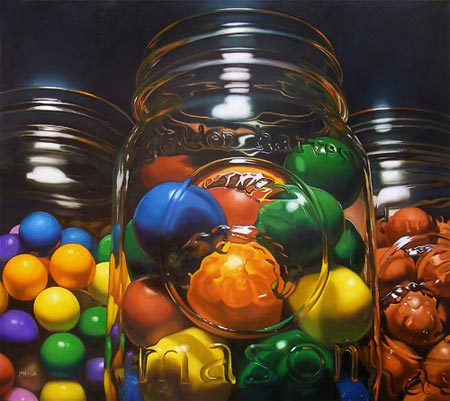 Margaret Morrison’s recent works are yummy, both in terms of their frequent subject matter of sweets and candies, and the sumptuous color with which she portrays those treats.

Morrison’s canvases are relatively large, often 4’x4′ (122x122cm) or larger, and put their small scale subjects into large scale relief, sometimes at eye level or above, giving our a glimpse of them a delicious feeling or intimacy.

She takes delight in the surfaces of gummy candies, smooth chocolates and shiny hard candies. The objects themselves are often strongly lit, adding to the impact of their color and the dimensionality of their forms.

Along with the candies, cupcakes and brightly colored Pez dispensers, you’ll find florals, colorful arrangements of fruit and other foods, and, if you go back far enough, a range of figurative work in a more muted palette and with a very different emotional tone.

Morrison has a solo show at the Woodward Gallery in New York that runs from March 7 to May 6th, 2009. There is a selection of her work on the gallery’s site.

There also also a portfolio of her work on the site of the Lamar Dodd School of Art, where Morrison is a Senior Lecturer.