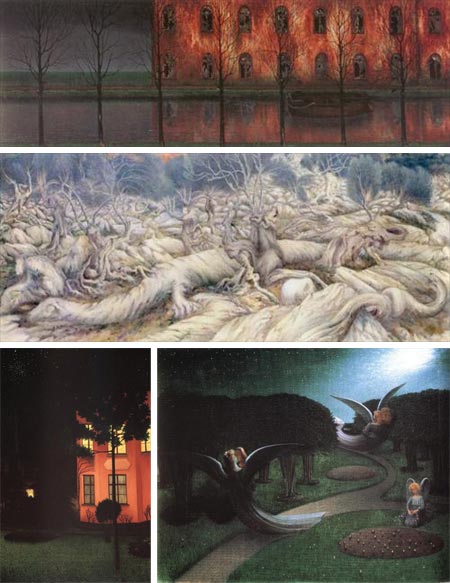 He was self-taught, though his style was influenced friends and roommates Jan Toorop and Henry de Groux.

His art was particularly shaped by his contact with the group of Symbolist poets to whom he was introduced by Juliette Massin, also an artist, who he married in 1894.

His paintings are often of representational scenes, landscapes, views of buildings and parks, but strongly tinged with a poetic softness and muted colors. He frequently chose to depict the subtle lighting of mist, dusk or night. He traveled and painted extensively in Austria, Italy and France and was at one time part of the group of painters known as “Les XX” (“The twenty”).

His painting The Pink House (image above, bottom left) is said to have inspired René Magritte’s famous Empire of Light paintings (also here). (Here’s an article about that notion on The Blue Lantern.)

Someone has put together a short video of some of Degouve de Nuncques’ work, set to a bit of Bach.