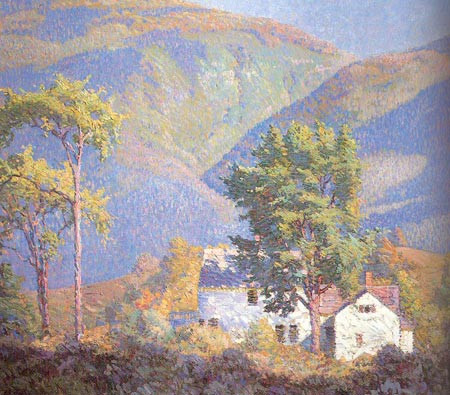 George Loftus Noyes was an American painter, born in Canada of American parents, who started painting at an early age, and became a noted landscape painter in the Boston area just after the turn of the 20th Century.

Noyes studied with English artist George Bartlett in Boston, and later studied in Paris at the ateliers of Gustave Courtois, Joseph-Paul Blanc and Paul-Louis Delance. It was there that he joined in the new enthusiasm among French painters for painting “en plein air“, and was undoubtedly influenced by the French Impressionist works making headlines at the time.

Noyes was able to exhibit successfully at the Paris Salon, and on his return to Boston, established himself as a landscape painter, painting many coastal paintings. Noyes was one of the first painters to paint Cape Cod. He also painted in the mountains of New Hampshire and Vermont.

Noyes is generally mentioned in association the the Boston School, though I can’t find any indication if he was in direct contact with artists of “The Ten American Painters” like Tarbell or Twatchman, of if he was in contact with the Cos Cob or Old Lyme art colonies.

He did travel and and paint with Frederic Edwin Chruch, including a painting trip to Mexico.

Tragically, much of his work was lost in a barn fire. I’ve found a few reproductions showing a bit of variety in his approach over time. In the image above, The Gorge, which I assume is of the mountains in New England, he reminds me a bit of Daniel Garber’s paintings of the Pennsylvania countryside.