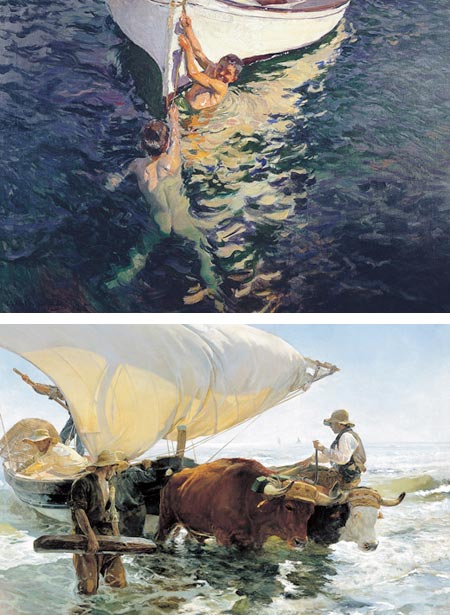 The rich, vibrant colors; the loose, confident brushstrokes; the painterly surface and broken color, the translucent sparkle of water on the skin of swimming children; the brilliant wash of sunlight defining a billowing sail; the sparkling daubs of suggested wavelets; the dappled corners of a summer garden; the saturated shadows of sun bathed cloth and the physical feeling of light, pouring through his paintings like a mist of illumination, may give you the… um, impression that Spanish painter Joaquín Sorolla y Bastida is an impressionist. He has more in common, though, with painters like his friends John Singer Sargent or William Merritt Chase, and some of the other so-called “American Impressionists”, than with the French “painters of light”.

Yes, Sorolla too is certainly a painter of light; light in all of its dazzling brilliance, light that acts like its own prism, breaking up into sparkling shards of intense color, but with a touch and an intention that is all his own. Veláquez was as much an influence Sargent or Chase, and his early exposure to the work of Jules Bastien-Lepage, and some of the Orientalist painters, along with his extensive classical training and study of the masters, lent his work an underlying classical solidity that the French rebels (with the notable exception of Degas) deliberately obscured with their own kaleidoscopic explosions of color.

Sorolla received attention and honors in Europe. With a dramatic show at the Hispanic Society of New York in 1909, and subsequent shows in New York, he entered a number of collections here in the U.S., including the Getty Museum.

It is at the Museo Nacional del Prado in Madrid, where the young Sorolla spent countless hours studying the work of the masters, and Veláquez in particular, that there is now a major exhibition of Sorolla’s paintings.

Simply called Joaquín Sorolla (1863-1923), the exhibition runs until September 6, 2009. There is a catalogue accompanying the exhibition.

The pages of the exhibition listing include reproductions of some of the pieces in the show, including the images above.

The Prado also has other paintings by Sorolla that you can search for here (hint, click into the zoomable image, then control-click or right-click on the zoomable image and choose “View in another window” to see the entire high-res image).

There are excellent sources for Sorolla’s work online, including Joaquín Sorolla y Bastida – The complete works, and the collection of Museo Sorolla, as well as others I’ll list below.

For more, see my previous post on Joaquín Sorolla. Sorolla was also friends with Aureliano Beruete, another independently minded painter who gets labeled as s “Spanish Impressionist”, and painted his portrait.

7 Replies to “Sorolla at the Prado”