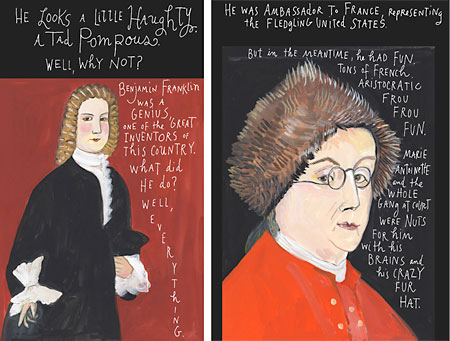 As I mentioned back in February, illustrator Maria Kalman is continuing her illustrated blogging for the New York Times with her current blog And the Pursuit of Happiness.

In her piece for July 30, 2009, Can Do, she focuses on my favorite of the United States’ “founding fathers” — inventor, raconteur, publisher, writer, ambassador, ladies man and all around interesting fellow, Ben Franklin.

(I’ll take advantage of this article to point out for the benefit of any “Freedom Fries” wingnuts who happen on it, that if Franklin hadn’t convinced the French to jump into opposing the British during the Revolutionary War, thereby pulling our fat out of the fire, we would still be a colony of England. I’ll also mention a favorite quote from Franklin, one that is terribly appropriate for our “war on terror” paranoia-filled times: “They that can give up essential liberty to obtain a little temporary safety deserve neither liberty nor safety.”)

I digress; but then, so does Kalman, delightfully wandering from Franklin to Mellville to Tesla and back again by way of a Jell-o mold competition and a green-eyed man named Fritz; celebrating along the way the inventive spirit that runs through the fabric of U.S. history like a bright fiber-optic thread.

[Via Daring Fireball and Kottke.org]

Link: Can Do, from And the Pursuit of Happiness on NYT
My previous post on Maria Kalman