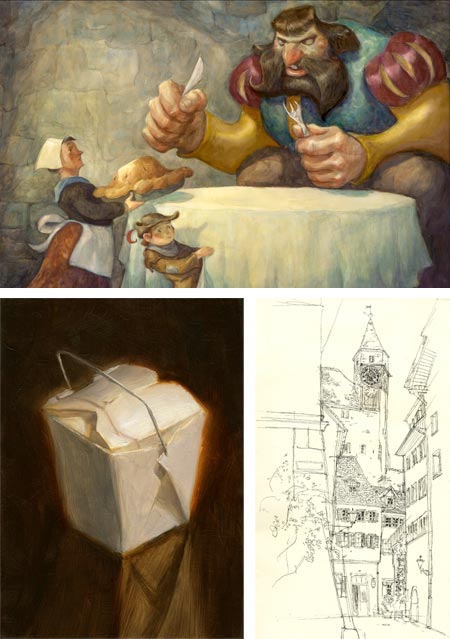 Robert MacKenzie is a California born artist currently living in New York City and working for Blue SKy Studios, the film and animation development studio whose credits include the Ice Age movies, Horton Hears a Who and Robots.

On his blog MacKenzie occasionally posts about his work with Blue Sky, but more often chronicles his personal projects, from travel sketches to still life or on-location cityscape subjects, to the illustrations for his new book, which is a retelling of the classic Jack and the Beanstalk story.

He painted the illustrations for the latter in gouache and watercolor. Prior to his recent book illustration projects, MacKenzie had been working professionally for years in Photoshop, and he found the return to traditional media both challenging and rewarding.

There is a detailed walk through of his process for the image above, top.

MacKenzie also illustrated a children’s book titled Fly, Cher Ami, Fly!: The Pigeon Who Saved the Lost Battalion, an at least one other whose title I don’t know.

MacKenzie also contributed to the collaborative comics/illustration volume Out of Picture, with his colleagues at Blue Sky.