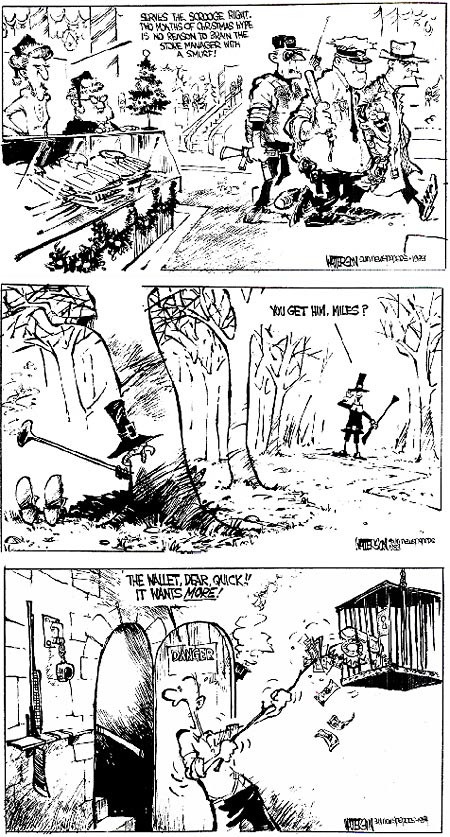 Bill Watterson, the artist and writer of Calvin and Hobbes, to my mind the best late 20th Century comic strip after Pogo ceased publication in 1975, is almost as notable for the things he didn’t do as for his actual accomplishments.

He didn’t accept the idea of merchandising his popular characters to the hilt, and resisted his syndicate’s constant pressure to do so, allowing only the publication of book collections of the strip and calendars. No stuffed characters, no Hobbes dolls hung upside-down with suction cups to the inside of station wagon windows, no notebooks, sticker books, T-shirts, TV specials or Burger King soda cups. Just the strip, pure and simple.

And it was pure and simple, a classic humor strip, brilliantly written and wonderfully drawn. He didn’t overcomplicate it, try to make it too topical or stretch it beyond its natural limits. When he felt the strip had run its course, Watterson retired, and again resisted any desire on the part of the syndicate to keep it alive artificially and milk it into oblivion.

Watterson himself did not seek the spotlight, preferring to let his characters do the talking, and rarely gave interviews. There was a brief interview with Watterson published in yesterday’s Celveland Plain Dealer (which I believe is his hometown newspaper). The interview was conducted by email, and is very short and not particularly revealing, but worth noting just as an event.

You’ll see it marked as the first in 20 years, but that discounts the question and answer with fans that his book publisher, Andrews McMeel, conducted in 2005 to promote the release of The Complete Calvin and Hobbes.

The cleveland.com site has also posted a selection of rarely seen editorial cartoons by Watterson from his stint with Sun Newspapers in the 1980’s. Unfortunately, as in the images above, the reproductions in their slideshow have apparently been poorly resized and lost some of their original line quality.

At any rate, it’s a good excuse to stop, pick up a Calvin and Hobbes book you haven’t read in a while, and be reminded that “there’s treasure everywhere”.