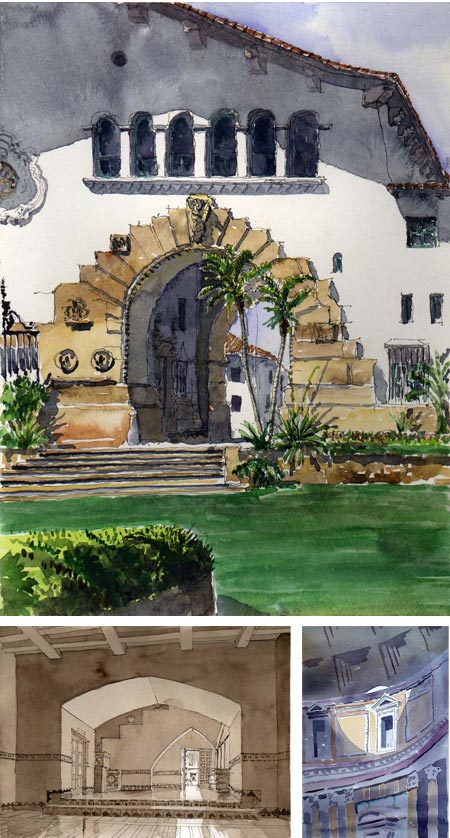 Harby took a sabbatical from the architectural office in which he had been working for many years and devoted it to travel and sketching, and in the process moved to watercolor as his preferred medium for observing and drawing architecture.

His site has a section of recent work as well as collections of archived work, both arranged by places, such as France, Persia, Rome, Northern Africa, Spain, Tuscany and Venice.

He moves between color and monochromatic watercolor, using the latter like ink wash for tone drawings.

Unfortunately, some of the posted images are frustratingly small (those from Venice, for example); others, however, are large enough to get a feeling for the work and place (note the “large image” button under the main preview images). Some are sketchlike and briefly notated, others more developed (like those in the Southern California section).

Harby’s knowledge of and affection for the great architecture of the past shines in his depictions of great architectural triumphs like the Pantheon, which has its own section (image above, bottom right, in which he captures sunlight from the oculus against the interior walls).

In his statement about Sketching Architecture, Harby points out one of the best and often overlooked advantages to sketching on location over recording a place with photography:

“When one is obliged to remain in one spot for longer than the snap of a shutter, sketching or painting with patience and concentration, one gains a sense of total immersion, not only visually, but through the sounds, smells, and (most rewardingly) tastes that a prolonged stay in these favorite places makes part of the experience.”