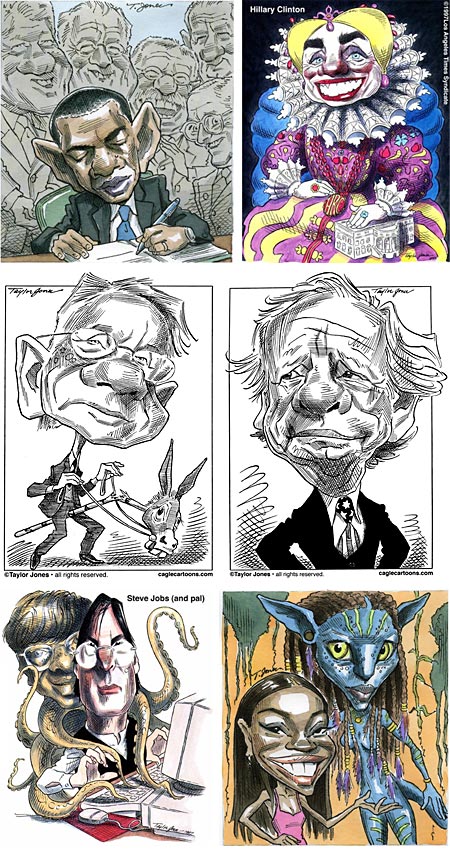 Taylor Jones is a caricaturist, illustrator and political cartoonist who is a regular contributor to EL Nuevo Dia, a newspaper based in Guaynbo, Puerto Rico.

He has adopted a nicely traditional cross-hatch pen and ink drawing style (like David Levine, looking back to the pen and ink illustrators of the late 19th Century) that he wields with aplomb while portraying and often skewering popular political and entertainment figures of the day.

He often produces color versions of his drawings which he accents with judicious touches of watercolor, enough to enliven the image while still leaving the appealing characteristics of the pen and ink drawing.

Jones’ web site has a modest gallery of his work, as well as a home page image that is replaced, according to him, “…daily, weekly, or whenever I feel like it”. You can find more of his work on Daryl Cagle’s Political Cartoonists Index (see my post on Daryl Cagle’s Professional Cartoonist Index). It’s not as obvious as it should be, but down amid the icons and stuff under the image are arrows for browsing through recent cartoons, as well as a drop-down menu for selecting a particular date.

In addition there is a selection of his illustrations on the Cagle.com site.

You can also go to the “Search For a Cartoon” page and search for Taylor Jones, for access to dozens of his cartoons (offered in both color and black and white versions).

Jones maintains his blog on the Cagle.com site. The blog covers a variety of topics, and the posts are always accompanied by one or more of his cartoon illustrations.