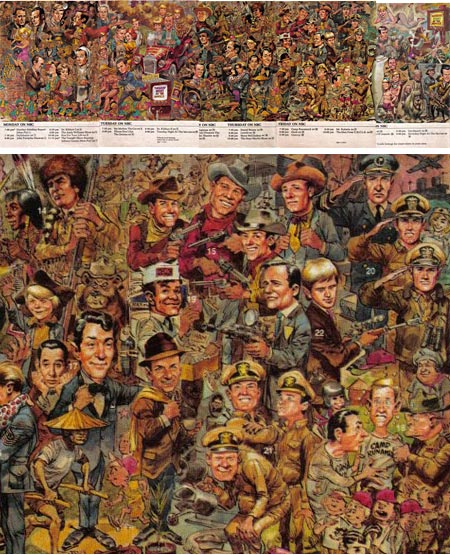 The great cartoonist, caricaturist and humorous illustrator Jack Davis is best known for his contributions to Mad Comics and Mad Magazine, particularly during the title’s heyday in the 1950’s and 1960’s, but he was a prolific illustrator and his work appeared in a variety of venues.

One of them was TV Guide, for which he often did covers. In 1965, the NBC television network commissioned Davis to draw a multi-page panorama featuring their entire fall lineup for the new season. The network took out a 6 page ad in TV Guide to display the ad.

This is one of those great Davis illustrations in which he fits dozens of caricatures into a single image, as he sometimes did for movie posters, like this one for Stanley Kramner’s It’s a Mad, Mad, Mad, Mad, Mad World.

Someone has posted an image of almost all of the NBC multi-page feature from TV Guide on the MAD Mumblings forum. Mark Evanier points out that it is still missing the page for the Sunday shows, and has asked if anyone can locate an image of the sixth page, or even better, rescan the entire set of pages at higher resolution.

[Via Metafilter and Mark Evanier]

[Addendum:} Evanier has posted a link to a larger version of the entire image on TV Series Finale. (Thanks, Rand.)