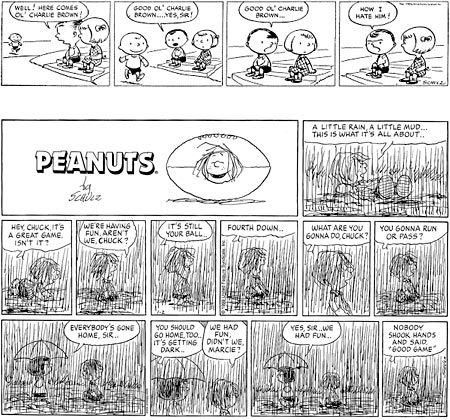 Peanuts, the iconic comic strip with a title its author hated, began 60 years ago today on October 2nd, 1950.

The name was tacked on by the syndicate, arguing that the name Charles Schultz wanted, “L’il Folks”, was too close to the names of other current strips, and downplaying the viability of his subsequent suggestion, “Good Ol’ Charlie Brown”.

The strip was amazingly successful, particularly given that its protagonist was the epitome of lack of success (making him, of course, the character so many could identify with).

The first strip, shown above, top and reprinted here, set the tone.

Peanuts ran until February 13, 2000, and was one of the most popular and influential comic strips of all time.

Schultz insisted that the strip die with him, and not be carried on by assistants (which he didn’t use) or surrogates, as was common practice for comic strips in the 20th Century when their creators died or retired.

A few months after his death, on May 27, 2000, more than a hundred of his fellow cartoonists honored Schultz and his creation with special tribute versions of their own comics.

The Peanuts strip was a farewell and thanks, but the next to the last strip, a Sunday shown above and linked here, was if anything, darker. Drawn by a seriously ill Schulz, it shows our protagonist still unable to kick the football after nearly 50 years of that running gag.

[Addendum: Akkkk! OK, it’s Peppermint Patti, not CB with the football in the rain, but you get the idea.]