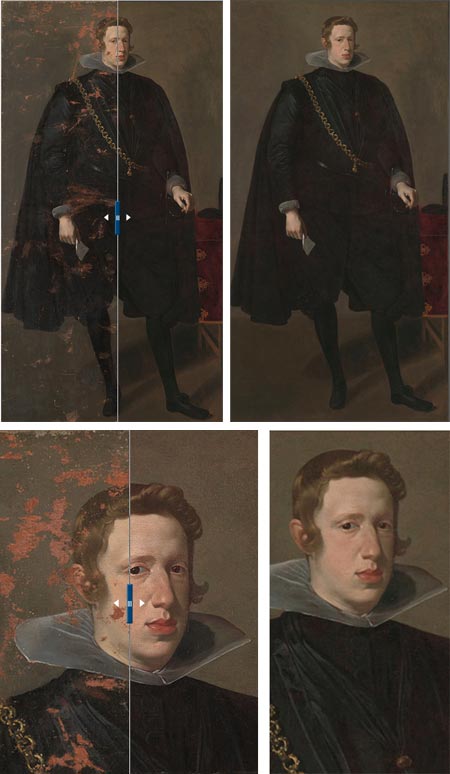 In 1973, for reasons still not clear to me, the Metropolitan Museum of Art in New York undertook a sweeping reassessment of many of its holdings, resulting in the downgrading of 300 old master paintings from attribution to the master to attribution to “workshop of”, “circle of” or “follower of”, removing them from the canon of those masters’ works and significantly depleting the value of the museum’s collection.

Some of those pieces have been again reassessed, both in the light of continued scholarship and as the result of subsequent cleanings and restorations. Last year the Met cleaned and restored Velázquez’s Portrait of a Man, and in the process restored it to it’s original attribution — originating from the master’s hand an not that of a subordinate. This was particularly significant as the painting is likely a self-portrait (see my post, Velázquez (Self?) Portrait Rediscovered).

This process has been repeated with a painting that was once, and is now again, one of the museum’s most important paintings by the Spanish master, who is sometimes labeled the greatest of all painters.

The full-length portrait of Philip IV of Spain is one of three the court commissioned from Velázquez after he became court painter. The painting had suffered over the years from numerous applications of varnish and misguided repainting, and was in a condition that made definitive attribution difficult.

The New York Times has a nice set of interactives on their feature, The Restoration of a Velázquez, that allows you to move a slider across the images, comparing the before and after restoration state of the painting (click between the “Restoration” and “Two Paintings Compared” tabs at the top of the feature).

I don’t know how long the NYT feature will be available before it disappears behind a registration wall. The painting’s listing on the Met’s site has both a larger version and a Zoomable feature, and still bears the “This information may change as the result of ongoing research.” tag.

We can assume (or hope) that Velázquez hasn’t indulged in flattering his subject here. The young Philip, pale, droopy eyed and red lipped, looks more like the dweeb you sat next to in chemistry than the ruler of one of the great empires of the world. But his appearance is consistent throughout paintings by Velázquez and others, and the master’s hand, revealed on the removal years of accumulated abuse, holds a steady mirror to nature.

(Image above, images of the interactive from NYT on the left, images from the Met on the right)

Link: The Restoration of a Velázquez, on New York Times
Phillip IV, King of Spain, Metropolitan Museum of Art