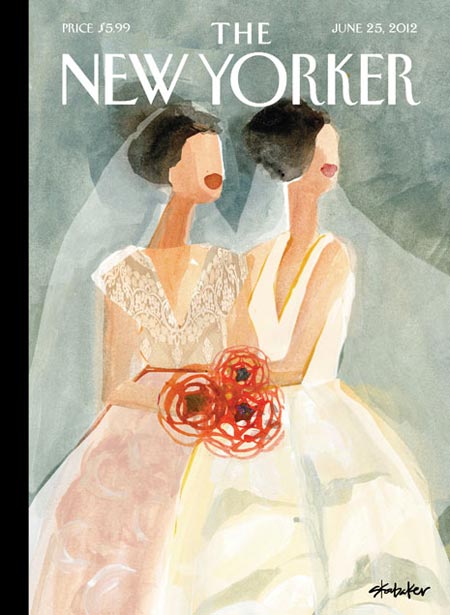 Back in March I reported about Blown Covers, a personal blog started by New Yorker art editor Françoise Mouly.

The blog is loosely based on her book of the same title, Blown Covers, about New Yorker cover submissions that didn’t make the cut, for reasons often fascinating and amusing.

The premise of the blog, however, is that as part of a weekly contest, she invites anyone interested to submit their artistic interpretation of a suggested topic that might be used for a New Yorker cover, just for fun — or so we thought.

Mouly has apparently kept her art editor’s eye on the blog submissions and has selected from them a submission that went on to be the actual cover for this week’s issue of the magazine.

Artist Gayle Kabaker’s “June Brides”, above, was picked out by Mouly from the blog submissions and chosen as the cover of the June 25, 2012 issue of The New Yorker. (For those not familiar with the prestige New Yorker covers carry among illustrators, this is a little like getting asked up on stage to play with The Who.)

You can see the original entries for the topic “Wedding” on the Blown Covers blog, and an article on the selection of the cover on The New Yorker.

For those whose interest has been piqued, Mouly posts new cover themes on Mondays.