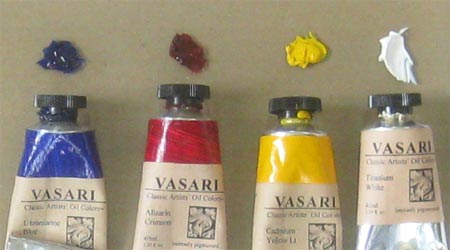 I was struck yesterday by a post on the blog of Jeffery Hayes about his experimentation with the limited palette recommended by Mark Carder in his method of learning to paint.

Hayes is a still life painter who uses a wide palette of up to 70 paints, and produces quite beautiful results from his choices. While not normally a fan of limited palettes, he tried this particular one at the suggestion of a friend, and was surprised at how flexible it was.

This prompted me to think about the palette I’ve been using, which is quite similar.

When I returned to painting after a long hiatus, I knew I wanted to use a limited palette, and set about researching which colors would be most advantageous.

What I eventually decided on was a palette of three colors, used as “primaries”, with the addition of one or two supplementary colors, depending on the intended use. (In choosing my palette, and for the purpose of this article, I put aside arguments about what “primary colors” actually are or are not, and I’ve used the term in quotes here to emphasize that.)

The basic colors I arrived at are: Alizarin Crimson, Ultramarine Blue and Cadmium Yellow Light.

Like almost any oil painting palette, these are used along with white (usually Titanium or Titanium-Zinc).

I’ve found this is actually a very common limited palette, and/or the core of many palettes I’ve seen in which these three “primaries” are augmented with one or two additional colors (as Carder has added the Burnt Umber to compensate for the high value of the yellow).

Adding a bright, warm red like a cadmium or pyrrole red is common. Burnt Sienna is sometimes used in place of Carder’s Burnt Umber. Another common addition is Viridian (or Phthalo Green), which mixes with Alizarin to produce a nice range of dark greens and reds, as well as making a pretty good chromatic black — as does Ultramarine Blue mixed with Burnt Umber, or the deep purple that can be mixed from Ultramarine Blue and Alizarin Crimson.

Kevin Macpherson, in his popular and well regarded books on painting, uses these three colors as primaries, supplemented with Cadmium Red Light and Phthalo Green.

I’ve seen these three colors on numerous supply lists for classes and recommended starter palettes for those learning to mix colors.

Some people have pointed out that there are “three primary” palettes that produce a wider gamut of colors (in which paints closer to cyan and magenta are used instead of blue and red), but gamut is not the only characteristic of paints relevant to artists. There are other factors like transparency, covering power, mixing strength, range of value and the ability in a limited palette to create strong mixing complementaries.

These three paints, when used as primaries, seem to work exceptionally well together.

Alizarin Crimson — while the subject of some controversy (and perhaps another post) — has a depth, richness and subtle characteristic in its undertone that is not found in other reds. Notably transparent, it makes a good glazing color and mixes well with other colors to create deep, transparent darks.

The controversy has to do with the debate over the lightfastness of Alizarin Crimson. Carder, and many other artists, use a “Permanent Alizarin” substitute. These are generally not Alizarin at all but quinacridone reds, essentially an “Alizarin Crimson Hue” — though why they aren’t labeled as such, I don’t know. While I personally prefer the real thing when painting in oils, I would less likely to recommend genuine Alizarin Crimson in a watercolor version of this palette, and would instead substitute Perylene Maroon.

Ultramarine Blue (French Ultramarine) is beautiful and remarkably flexible. It’s warm and strong, but not overwhelming in mixes, where it excels in creating a broad array of colors. A touch of Cadmium Yellow Light brings it into the range of cool blues common for skies.

Cadmium Yellow Light (or Pale) is perhaps the strongest, clearest, “yellowest” yellow available to artists — almost neutral but slightly warm (depending on the manufacturer) and nicely opaque. Combined with Alizarin Crimson, it can produce a warmer red (though not as bright and warm as a Cadmium Red) and a surprisingly bright range of oranges and orange-yellows.

The bluish Alizarin Crimson and the reddish Ultramarine Blue combine to make a beautiful range of clear purples, either deep or bright with the addition of white. Clear purples are often difficult in limited palettes.

Ultramarine Blue and Cadmium Yellow Light can create a wonderful array of greens for landscape, bright enough that most still have to be dulled down a bit with Alizarin so as not to be too high in chroma.

All three of these colors are strong in mixes, but not so strong as to overpower other colors. (Phthalocyanine pigments, for example, can sometimes be overwhelming in mixes and difficult to control. However, Alizarin Crimson can stand up to Phthalo Green well enough to produce a range of dark reds and greens as well as a deep chromatic black. Mixtures with Phthalo Green can be darker than similar ones with Viridian.)

While not “ideal complementaries” — colors directly opposite on the theoretical hue circle — these colors produce effective “mixing complementaries” — paints that have the desired effect of moving a color toward gray when mixed together.

The weak point of a palette consisting of just these three colors (while simultaneously one of its strengths) is the high value of the Cadmium Yellow Light, which lightens almost any mixture to which it is added. This is the reason a dark orange-red like Burnt Sienna or Burnt Umber is often added.

These three colors, as primaries, also form the basis of many common “split-primary” (or “color-bias”) palettes, which utilize a warm and cool version of each primary.

Those palettes usually add a cool yellow (often Cadmium Lemon), a cool blue (commonly Cerulean, or Cobalt, which is almost neutral) and a warm red (Cadmium Red Light, or a Pyrrole Red).

The core palette, however is Alizarin Crimson, Ultramarine Blue and Cadmium Yellow Light — in common use, augmented with one or two supplementary colors like Burnt Umber, Burnt Sienna, Viridian or Cadmium Red.

Painters who are used to a larger palette, but want to experiment with a limited one like this, may find it helpful to mix piles of the secondary colors from the primaries on their palette before starting to paint. That way, in addition to the tube color red, blue and yellow, your set-out palette can contain mixed orange, purple and green — and, with a little additional mixing, some pretty good approximations (at least in hue) of earth colors like ochres and siennas. It’s surprising what a full palette you can create from these three colors. Adding an actual dark earth color, like Burnt Sienna, extends it even more.

A limited, three or four color palette like this can have several advantages.

One, of course, is simplicity and expense. You only have to buy five tubes of paint (including white) to have a relatively complete and versatile palette. I do recommend, however, not skimping on the Cadmium Yellow Light by substituting a paint labeled “Cadmium Yellow Light Hue” (usually made from an Arylide Yellow), which will be much less satisfactory in this use.

A limited palette like this forces a kind of built-in color harmony, in that almost any color applied is likely to be a combination of two or three of the same tube colors.

This kind of palette is ideal for someone like me. My temperament is quite different from Hayes and others who find a very broad palette useful (which it certainly can be for having the widest range of clean, intense colors available).

I get overwhelmed with too many color choices, and much prefer to mix from a limited number of colors. When mixing a red and blue to make purple, I don’t have to decide which red or which blue to start with — that’s a given. My goal at this stage is to learn these few colors well, seeking a deeper understanding of how they work with each other in repeated application.

Artists who find a multitude of color choices confusing, are starting to learn color mixing, or are looking for a convenient, limited palette to carry into the field, may find these three colors, with one or two additions, a great place to start.

26 Replies to “The joys of a limited “three primary” palette”