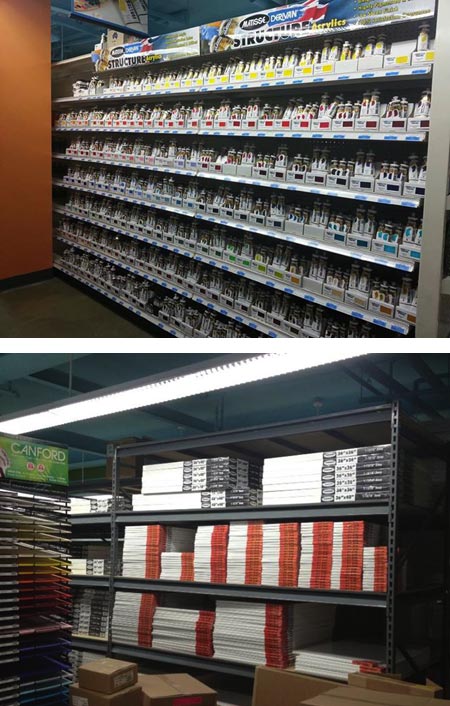 I’m happy to report that Jerry’s Artarama, an art supplier familiar to many from their online presence and a chain of retail stores across the U.S., has opened a store in Wilmington, Delaware.

And why, you ask, should this be of interest to the wider national and international audience of Lines and Colors? Well, it’s relevant in that it prompts me to bring up the general state of online art suppliers and the availability of brick and mortar art supply stores in smaller cities.

Wilmington, Delaware is a relatively small city (population: 70,000) in the shadow of a large one — Philadelphia; it’s also near where I grew up, and still not far from where I live.

In years past, Wilmington had an art supply store called Audio Visual Arts, which everyone simply called “A.V.A.” It was one of those stores that seemed like a fixture when I was younger; as far as I knew it was always there, and I expected it to always be there. For a time, Wilmington supported two art stores — on the same block — after disgruntled A.V.A. employees started a rival store just a few doors down.

All of that changed when commercial art went digital at the end of the last century, as it did for so many art stores that depended on commercial artists as their primary customers and carried supplies for painters and students as a sideline. Brick and mortar art stores took another hit from the increasing prevalence of online art suppliers in the first decade of the new century.

Wilmington went from two art stores to less then one, when what remained of A.V.A. was moved to a small space adjoining the company’s related blueprint service, and the rival store went out of business. The small demi-store, left to cater to students and Sunday painters, eventually went under as well, leaving those who wanted to shop locally for art supplies to drive to a small shop in a nearby college town (Finley’s – a nice little shop, but with limited stock); or travel to Philadelphia, negotiate city traffic and fight for parking; or just be at the mercy of the suburban big-box arts and crafts stores. Any serious painter who has shopped at the latter (at least judging by the stores in this area) knows what a disappointing experience that can be.

Even though Wilmington has had a relatively small but growing art school, the Delaware College of Art and Design (where I teach a class in Web Animation with HTML5 and Adobe Flash) on it’s main shopping street since 1996, it has been without a real art supply store for a long long time. That changed last week, when Jerry’s Artarama opened its newest retail store in a building owned by the school, due in good measure to efforts on the part of DCAD’s president, Stuart Baron, and with cooperation from the city.

To me, and I’ll warrant a number of other artists in the region, a real brick and mortar art supply store opening in Wilmington was like flowers blooming in an long empty lot — a hopeful sign that things are changing for the better.

I certainly understand the appeal of online art suppliers. It’s difficult for brick and mortar stores to match the selection available from a large online supplier (similar to the difficulty faced by brick and mortar bookstores). For example, I recently ordered a jar of Red Ochre acrylic primer and a bag of marble dust to mix into it for texture — not items in high demand in local art stores. Also, my personal preference in oil paints is a brand of handmade paint from a small company that is only available online (see my post on Vasari Classic Artists’ Oil Colors).

However, when possible, I like to buy my other art supplies locally. There is something to be said about being able to see and feel the items you’re buying — the stiffness of a brush, texture of a canvas, thickness of a drawing paper or color of a marker — and the ability to pick up what you need today, when you need something for what you’re working on, not in a few days when FedEx trundles by with a shipment. (Plus, much like bookstores, I just love the way art stores smell.) So I like both online and local shopping for art supplies — for different reasons.

Philadelphia, about 30 miles from Wilmington, is a large city — with, I am told, more art schools per capita than any other American city. It has long supported multiple art supply stores in the downtown area (called Center City by locals), though individual stores have come and gone over the years. (When I was an art student, there was a cramped, cluttered, quirky and wonderful store called Zinni’s that was reminiscent of the bizarre little “we have it in the back” shops for magical paraphernalia in the Harry Potter movies — but I digress.)

The situation in Philadelphia has changed over time as well, both when the commercial art shift to digital media closed some of the stores that depended on commercial art customers, and more recently when Dick Blick, the largest online art supply company and chain of associated retail stores, opened a large store pretty much halfway between the city’s two largest art schools, the University of the Arts (formerly the Philadelphia College of Art) and the Pennsylvania Academy of the Fine Arts (where I spent my time as an art student years ago).

When the Blick store opened, a new large scale art store seemed a plus, and the store was welcomed by both students and the larger arts community (if not by its competitors, like Utrecht, the previous dominant presence). The other stores in Center City seemed to fare well enough in the following few years, leading to the thought that the city could support one more art store without losing the others.

That changed, however, when the Blick company bought Utrecht earlier this year (reportedly for their proprietary line of paints and canvas) and promptly closed the two Philadelphia Utrecht stores, undoubtedly with the idea of forcing everyone who had shopped at Utrecht to go to the single Blick store, raising that store’s profit per square foot. While this has likely been accomplished to the satisfaction of the company’s bean counters, I and many other local artists thought of it as regressive and a sorry event. At one time there were five art supply stores in the central part of the Philadelphia; there are now two — the big Blick store and a smaller (but quite good) Artist & Craftsman Supply store, part of a less extensive national chain.

So I’m happy that the unfortunate loss of the Utrecht stores (one of which was much more convenient for me reach than the Blick store) now seems offset by the new Jerry’s store in nearby Wilmington. Though I can bemoan the fact that all of these stores are part of national chains, and most (but not all) of the independent art supply stores in the wider metropolitan area are gone, I still feel encouraged when physical art supply stores open up, rather than closing down.

I was also encouraged that the new Jerry’s Artarama store in Wilmington is reasonably large and well stocked, comparable to the Utrecht stores we lost in Philadelphia — a serious art store and welcome antidote to the painfully meager offerings of the big-box craft stores. Artists and students in Wilmington have long had to travel to Philadelphia to buy art supplies, but the new Jerry’s store may well pull in the other direction, drawing students and others from out of state to the Wilmington store with the lure of easier parking and Delaware’s famous lack of sales tax.

A larger question posed here, however, and one I don’t have an answer for yet, is whether any of this is indicative of national trends, or is simply a local reshuffling of pieces on the board.

I’ll have to wait and see, but at least in the meanwhile, I’m happy I have another place to go when I need a painting panel, a #2 filbert, tube of gouache, a brush marker or a bottle of stand oil — or when I just want to walk into a store that smells like art supplies.

12 Replies to “Wilmington, Delaware gets an art store!”