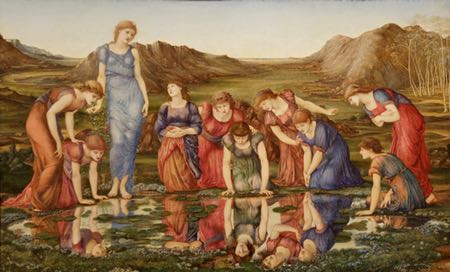 The Mirror of Venus, Edward Burne-Jones

Link is to Wikimedia Commons, original is in the Calouste Gulbenkian Museum, Lisbon.

Pre-Raphaelite painter Edward Burne-Jones, who went on to be a major figure in style known as Aestheticism, presents a tableau of female figures, some staring at their reflections in the mirror of a still pond, others looking at the striking figure in blue, whose gaze falls on the pool but not on her own reflection.

The artist has left it to us to interpret the different expressions of the women, perhaps suggesting that each is seeing something unique in the nature of her own reflection, or in the presence of the standing figure.

In a way not possible to viewers of the real painting, we can use the magic of Photoshop to view the reflections of the women in the pool, turned right-side up (image above, bottom) revealing that Burn-Jones has painted them with as much attention and skill as the primary figures.

Not only that, but faces with downcast eyes, in which we cannot see the pupils in the main figures, look different from the upward viewing angle of the reflected faces in the pool.

2 Replies to “Eye Candy for Today: Burne-Jones’s Mirror of Venus”