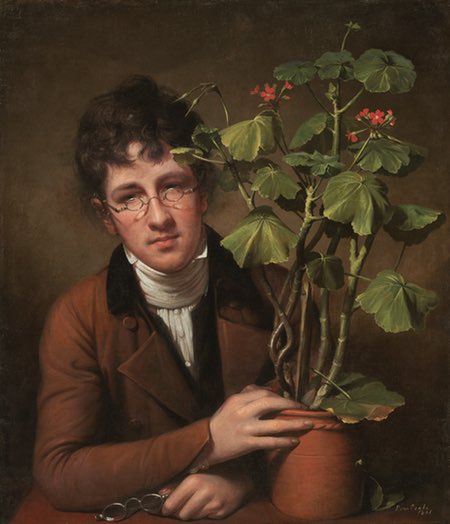 Rubens Peale with a Geranium, Rembrandt Peale, oil on Canvas, roughly 28 x 24 inches (71 x 61 cm); in the collection of the National Gallery of Art, DC.

The American painter and naturalist Charles Willson Peale named most of his children after noted artists or scientists. Some of them took up the interests of their father, Rembrandt became a noted portrait painter, and Rubens a botanist and later in life a still life painter.

Here, a young Rembrandt Peale paints a portrait of his 17 year old brother Rubens holding his prize specimen of a geranium — at the time an exotic plant, not native to the Americas — supposedly the first grown on the continent. Rembrandt has given the plant a careful and portrait-like treatment to honor his brother’s accomplishment.