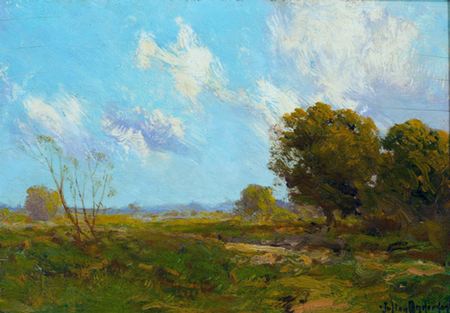 The link is to the image page on WikiArt, which unfortunately doesn’t have much information about the size or location of the original. If you click on “View all sizes” under the image on their page, you can access a reasonably high res version of the image. Presumably, this is oil on canvas.

Texas painter Robert Julian Onderdonk, who was active in the late 19th and early 20th centuries, is considered an “American Impressionist”, and in known in particular for his landscapes featuring fields of Texas Bluebonnet flowers.

Here, his subject is less colorful and more prosaic, but, even though I’ve only see it in reproduction, I just love this painting. Onderdonk’s seemingly casual brush work is so delightfully brushy and textural, the usual adjective of “painterly” seems insufficient.

One Reply to “Eye Candy for Today: Julian Onderdonk landscape”