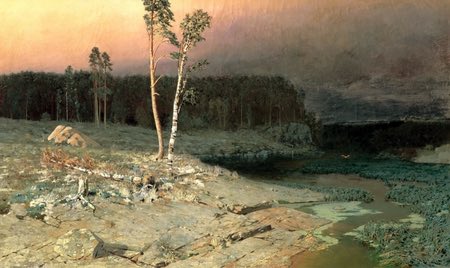 Arkhip Kuindzhi is a Ukrainian painter I first featured on Lines and Colors in 2012.

Kuindzhi was born in Mariupol in the 1840’s (the exact date is not known), at a time when that part of Ukraine was subjugated by the Russian Empire. He was active in the late 19th and early 20th centuries.

He was largely self-taught but also studied with Adolf Fessler, a student of the influential Ukrainian painter Ivan Aivazovsky, and also at St. Petersburg Academy of Arts for a time.

Kuindzhi joined the Peredvizhniki a cooperative group of painters from the Russian Empire, who defied the restrictions of the Academy and banded together to present independent exhibitions in various cities. Peredvizhniki is roughly translated in english as The Itinerants or The Wanderers.

Kuindzhi was noted for his landscape paintings, which featured daringly different compositions and dramatic lighting.

There is an interesting article on the artist and his wife on Arthive: Love Story in Paintings. Arkhip and Vera Kuindzhi.

Darkness plays an important role in many of his compositions, which often seem to be either closed in or completely spare and open. Unfortunately, I have found many of the reproductions of his work on the web seem to have the problem of being too dark, so — as always with reproductions of art images on the web — don’t assume that the images you’re seeing are always accurate.