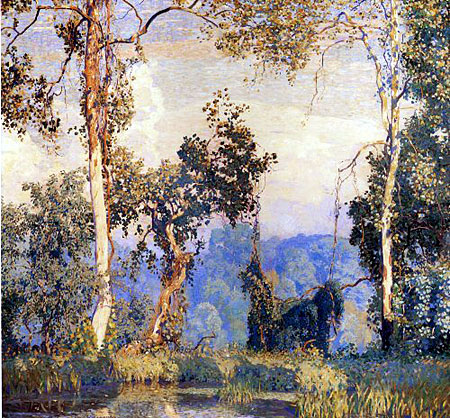 I’m not sure “Romantic Realist” is the tagline I would assign to Daniel Garber, but I think it’s possibly more accurate than “Pensylvania Impressionist”, the category to which he is usually assigned.

Daniel Garber: Romatic Realist is the name of a retrospective exhibition, displayed jointly at the Pennsylvania Academy of the Fine Arts, here in Philadelphia, where Garber studied and then taught for many years (1909-1950), and the the James A Michener Art Museum in nearby Bucks County, where Garber settled and painted for most of his later life.

I wrote about Garber back in November in anticipation of this show and I finally got to see it on Sunday. The first thing I’ll say is that my already high opinion of this remarkable painter is now even higher. The reason I take issue with either the “Pennnsylvania Impressionist” or “Romantic Realist” labels is that Garber is both. As a friend of mine astutely pointed out at the show, if you get up close, Garber is an impressionist; if you step back, he’s a realist.

Actually, up really close, the surfaces of his paintings, although occasionally spattered with bright daubs and flecks of pure tube color as bright and separate as the most brilliant Monet, are more often reminiscent of the great globs of scumbled, broken color the Expressionists used to exclaim “Paintings are made of paint!“. But, when you step back, and we found ourselves doing a lot of stepping up and back at this show, Garber’s chunks and bumps and scratches and splashes of color somehow, in some remarkable painter’s alchemy, resolve themselves into stunningly beautiful scenes of the Bucks County countryside that can look distinctly representational and “realist”.

Garber has been quoted as saying “I’m not a colorist… I’ve had to work hard for all the color I’ve acquired.” Wow. Here’s an example of hard work paying off. If anything impresses me about Garber, and goes a long way toward explaining his alchemy, it’s his command of color. Not only in the placement of hues in skies and water as brilliant and intense as any exaggeration by Maxfield Parrish, but in unexpected places. I noticed it particularly in the shadows of trees, where a flat single brushstroke of cobalt blue, that up close looks like it couldn’t possibly be a shadow on the bend of a bright sycamore limb, assumes that role when viewed from a few feet back as perfectly as if the limb had been delicately modeled with painstaking blending.

The Parrish comparison is an apt one, both because Garber also worked as an illustrator for a time and because of his Parrish-like intensely colored rock faces and quarry walls, though Garber’s tend to be bleached out by the true light of the Pennsylvania summers, rather than Parrish’s imaginary light from a storybook sun. There were also times when I felt the presence of Pyle and Wyeth, both in the handling of the paint and the kinship of the Bucks County countryside to the hills of the Brandywine Valley. My wife was a Bucks County girl, and I grew up in Delaware near the Brandywine; and Garber’s evocative paintings of these familiar landscapes made us both feel right at home.

Comparisons of Garber with other artists come to mind, including delightful echoes of Corot, and the wonderful mix of realism and Impressionism found in the work of Caillebotte and Sisley. Garber shared with Sisley the repeated theme of framing a scene with darker foreground trees, revealing the scene behind them as bands of color: earth, water and sky. This framing device is one of the things I love most about Garber’s compositions. He makes it work again and again to remarkable effect.

But it is Garber’s ability to suggest that I think painters working in this vein will most admire; whether it is the simple split-hair drybrush suggestion of stands of bare trees against the haze of a distant hillside, or the magically controlled blobby strokes that somehow make a perfect effect of the feathery traces of willows when viewed from a few steps back.

You can also see the influence of other “American Impressionists”, particularly in Garber’s room interiors and figures, areas where he isn’t as as strong as, say, Edmund Tarbell or Childe Hassam, but shines nonetheless. You can also see influence from another great Academy alumni and instructor, Thomas Eakins. Garber studied with Thomas Anshutz, who was a student of Eakins.

The portion of the exhibition at the Pennsylvania Academy of the Fine Arts only runs until Aprli 8, the portion at the Michener is there until until May 6, 2007. The Michener also offers a driving tour (instructions online) of the areas where Garber painted.

I haven’t yet gotten to the Michener Museum’s portion of the show, which covers Garber’s later work (1930-1955) just the portion at the the Academy.

It’s wonderful to see this show hung in the Academy’s beautiful Frank Furness building. The Academy’s portion of the show, which constitutes the larger part and covers his work from 1897 to 1929, includes many of his etchings and beautiful charcoal drawings, including student cast drawings done from casts (plaster replicas of antique sculpture) that were still in use when I was a student at the Academy.