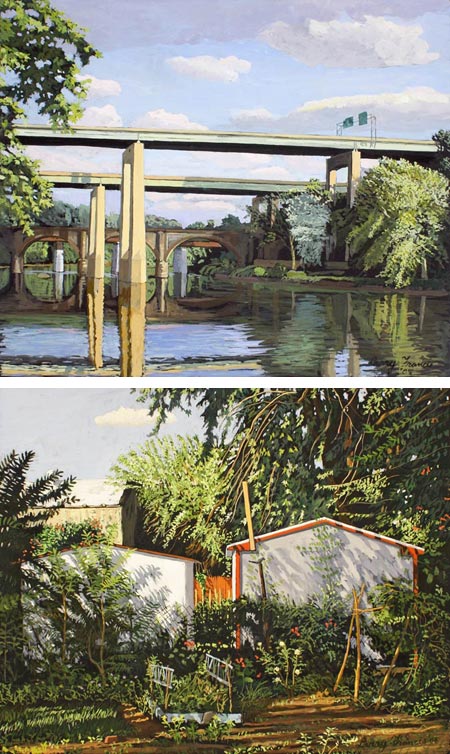 Scale is an interesting aspect of painting and drawing. I’m always fascinated when artists choose to work at both relatively large and relatively small size, particularly when working with the same subject matter (see my posts about Thomas Paquette and his large oils and very small guoache paintings).

Philadelphia area painter Larry Francis also paints fairly large oils (perhaps 48×60″; 121x152cm), and small gouache paintings (around 11×14″; 27x35cm) . His subject matter, which is consistent in both types of paintings, includes an interesting range of ordinary subjects in and around Philadelphia.

By “ordinary” I mean commonplace scenes that would not be thought of as particularly scenic, like images of suburban houses and yards, typical city street corners, small sections of parks, neighborhood stores, bridges and other views, the like of which we pass by every day without thinking.

This, of course, is one of the things that art does best, to wake us to more alert observation of our surroundings and remind us that the ordinary is extraodinary, the commonplace worthy of notice and appreciation.

Even Francis’ views of the Schuylkill river, which could have been chosen from more scenic vantage points, instead are often views of bridges and bridge piers, the kind of view commuters might glance at without noticing day after day as they make their routine trips into center city along the river drives.

I particularly like his paintings of Schuylkill river bridges, which perhaps can be thought of as in the tradition of Thomas Eakins, who often included Schuylkill river bridges in his portrayals of scullers. Eakins obviously couldn’t have painted the Route 1 expressway bridge (foreground of the image at top, larger version here), though I have to think he might have included it had it existed at the time.

Francis consistently reveals beauty in the ordinary, with geometric arrangements of houses and commercial buildings arrayed in planes of light, broken with dappled shadows from vegetation and the horizontal bands of color in streets and sidewalks.

I was struck but the issue of scale because I had encountered an oil painting of his at the Pennsylvania Academy of the Fine Arts, where he is an instructor, showing a view of the Schuylkill river from the same vantage point as the one above, though wider in aspect and much larger in size, perhaps 4’x12′ (121x365cm). I was struck by the painting, and delighted to have the chance to see his small gouache paintings of the same area at his current show at the Gross McCleaf Gallery, which is focused in particular on his small gouaches.

I was also glad I had a chance to meet the artist at the opening, and I asked him about his approach. I had made an assumption because of the finessed attention to detail, and the unhurried feeling of relaxed observation evident in these small works, that he was working, at least in part, from photographic reference. He paints these gouache paintings on location, however, working perhaps two paintings a day to catch the different states of light, and returning to the scene two or three times to finish them.

Those in the Philadelphia area still have a chance to catch the show at the Gross McCleaf Gallery, which runs until this Saturday, January 24, 2009.