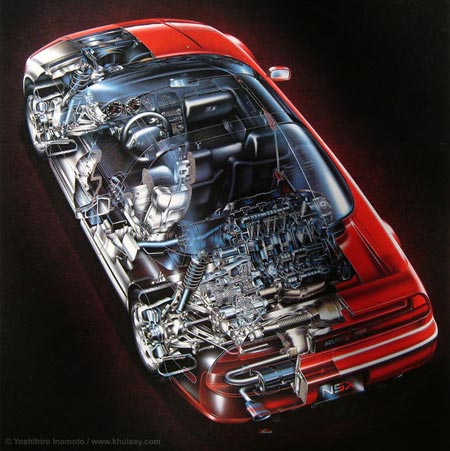 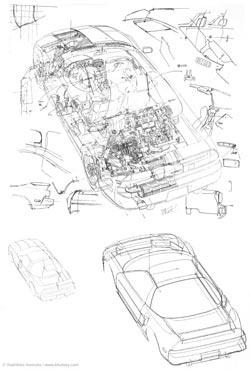 The twelve year old kid that lives somewhere at the base of my brain, happily soaking up cool stuff like robots, spaceships and dinosaurs, has an undying fascination with cutaway images.

These are the drawings and paintings that show the gleaming inner workings of something, usually a delightfully complex piece of sophisticated machinery like a racing car or jet plane, in the context of the outer appearance, as though viewed with Superman’s x-ray eyes.

These images reach mind-blggling levels of complexity. There is an assumption that the modern use of computer imaging somehow solves all of that, and makes it “easy”, but that’s far from the case.

And lest we forget that the era of computer based illustration is actually still quite young, we can look at one of the masters of cutaway illustration, Yoshihiro Inomoto, who has been doing unbelievably intricate renderings of the hyper-complex geometry and shining metal surfaces of the interior parts of cars, internal combustion engines, motorcycles and other objects of mechano-lust, since the early 1950’s, using traditional illustration techniques of pencil drawings, ink and airbrushed final renderings.

Inomoto left high school early, pursuing his own path through classes in illustration and design, went to work for companies like Mazda and Nissan; and eventually became a freelance technical illustrator. His cutaways start with a traditional pencil sketch, which he refines with the use of tracing paper to re-position and combine different components, to create a detailed drawing that is then transferred to illustration board for final rendering.

Though many manufacturers utilize 3-D models to create technical renderings these days, a number of current technical illustrators, many of them deeply influenced by Inomoto, specialize in 2-D illustrations, even if drawn with a computer stylus and drawing tablet rather than pencils and paint.

There’s just something about the feeling of an illustration, even one as complex and technical as these get, that can’t be easily replicated in CGI modeling.

In recent years Inomoto has learned the modern Illustrator and Photoshop techniques being employed by his juniors, but still prefers traditional methods.

Techincal Illustrator Kevin Hulsey has a section his site of Masters of the Cutaway, that prominently features a page on Inomoto.