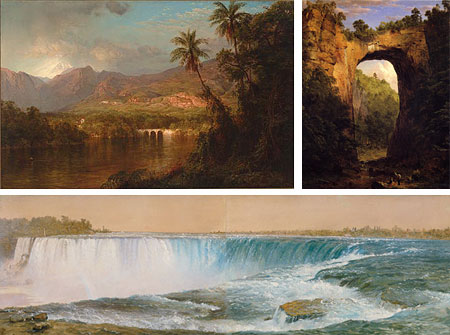 How about some church on a Sunday? Frederic Edwin Church, that is.

Church was the only student of Thomas Cole, who essentially started the Hudson River School of landscape painting, although whatever teaching transpired was probably more about what to paint than how to paint. Cole reportedly said that Church already had “the finest eye for drawing in the world” at the time, and Church is widely regarded as one of the finest American artists, perhaps the finest prior to Thomas Eakins and Winslow Homer.

He set out to convey the drama and grandeur of the North American and South American wilderness. (This was back before business and industry had really started in earnest their campaigns to rid both continents of those annoying patches of undeveloped wilderness.) Every spring to fall he would travel and sketch, often traveling by foot, and return to the studio in the winter to create his monumental works.

He painted landscapes on a grand scale, both in terms of subject and in the monumental scale of some of his canvasses. His famous painting Heart of the Andes, is a five foot high by ten foot wide (168 x 302 cm) canvas that was originally unveiled in a special room with dramatic gas jet lighting, curtains and palm fronds, to great response. Thousands of people paid admission to see the painting. We’re jaded by exposure to movie screens and billboards so it’s hard to grasp the visual impact of a dramatic image of exotic wilderness on that scale in the mid-1800’s.

Church became very successful and in 1867 he bought a parcel of land with a magnificent view of the Hudson River and later constructed his personal Persian-style castle Olana, which is today a museum dedicated to Church and his work.

Church is also deservedly famous for his sweepingly dramatic views of Niagra Falls (before development, honeymooners and the Three Stooges), of which he painted several. I had the pleasure of seeing one of his paintings of Horseshoe Falls (above) when it was on display at the Pennsylvania Academy of the Fine Arts several years ago, and it just knocked me out. It’s stunning. I’ve also seen his work in several permanent collections here in the northeast.

The remarkable thing about Church’s work is that someone with an eye for composition can easily pick out numerous small paintings that could be cropped from areas of the larger works and stand on their own as wonderful paintings.