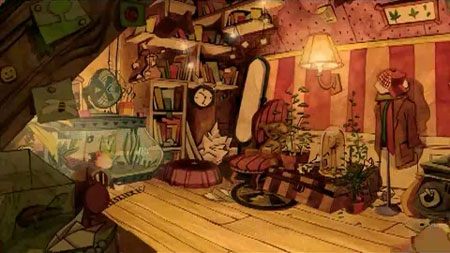 France is the largest producer of animation in Europe, and the third largest in the world.

Gobelins, L’Ecole De L’image (Gobelins, School of the Image), is a school in Paris that, in addition to studies in Graphic Arts, Multimedia and Photography, offers an apparently superb program in animation. I make that judgement on the basis of the quality of their animation students’ short films.

Each year since 2002, the Gobelins animation students have divided up into small teams of 4 or 5 students and created short (90 second) animations for entry in the Annecy International Animated Film Festival (English version here).

The resultant short animated films are just a treat.

There is some general information about the school in English and about their summer program, which is offered in English as well as French.

The majority of the school’s site is only available in French, but the films rely very little on words and there are links to view them in the browser as well as direct podcast “Add to iTunes” links. The clips require Quicktime, but you should have that anyway if you care about viewing quality video on the web.

The image above is from a delightful part traditional, part CGI animation called Sébastien, one of this year’s entries. I could go on about the individual entries but UK animator and designer Michael Hirsh has a good introduction to this year’s Gobelins entries on his excellent Articles and Texticles blog, which is where I learned that the current entries were available.

I give links below to the school itself as well as their previous years animation festival entries.

If you were surprised to learn that France is the third largest producer of animation worldwide, you may also be surprised an delighted to preview the next generation of French animators.

Link via Articles and Texticles.

Addendum: Michael Hirsh writes to say that one of the animations teams has created a fascinating website describing the process of creating their short, Pyrats, including background designs, character model sheets, storyboards and more. They also discuss it on their blog (English version). Michael fills you in on the details here.