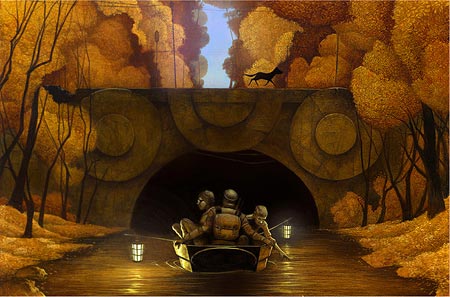 August Hall is a California based illustrator and concept artist. He has done work for Industrial Light and Magic, Pixar Animation, and Dreamworks. He has also done covers for DC Comics’ Vertigo line. That’s about the extent of what I know about him except that I like what I’ve seen of his work. The one online collection of his work that I’ve found is on Allen Spiegel Fine Arts, which is apparently a rep for several sci-fi and comics artists.

The work in that gallery, though not identified by project, seems to be mostly book or editorial illustration, with a few pieces that feel like movie concept art.

Allen Spiegel Fine Arts apparently publishes books with work from the artists they represent, Hall is represented in a compendium of work from many artists called asfa presents 108 drawings. He is the author and illustrator of a children’s book called Song and Juniper and the illustrator of When I Met the Wolf Girls by Deborah Noyes.

Some of his illustrations have a children’s book sensibility, some are much darker. There is a wider variety of stylistic approach. All of them though, are imaginative and engaging. One element that seems to weave its way through all of his work is a fascination with textures. His images are rich with a tactile sense of stone, fabrics, skin, and natural elements like foliage and rain that are represented more as textures than objects.