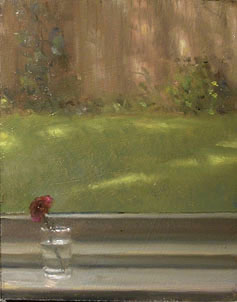 I will often, if not always, try to mention Duane Keiser in my posts about Painting a Day blogs, because he started the idea back in December of 2004 (followed shortly by Julian Merrow-Smith). I originally posted about Keiser in October of 2005. Keiser is still at it; he has allowed himself to be more relaxed about his schedule after keeping it faithfully of over two years. He still keeps painting and posting at close to a painting a day, however, and now has a second blog called On Painting, in which he comments on the process and the phenomenon that he started as well as covering topics of interest to painters in general. 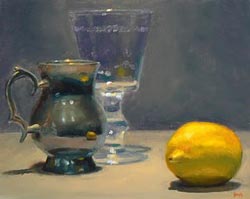 I’ve posted about longtime painting blogger Jeff Hayes and his blog State of the Art before, here and here. Jeff has been posting his immediate, intimate and often theatrically lit still lifes for some time, as well as small landscapes.

To my eye his still life paintings are becoming increasingly more refined in the application of color, in particular reflected color bounced between objects and their surroundings. He has pushed his output up a notch and has been doing a painting a day since August. It is also worth going through Jeff’s site for his commentary on painting techniques. 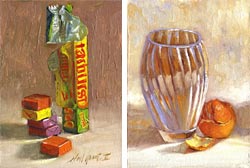 Hall Groat II, who has been a working artist for 20 years and is also an Associate Professor at Broome Community College in New York, has been posting his small paintings, as well as larger works, in a blog titled Painting Eight Days a Week.

His subjects include the small still lifes of fruit, eggs, vases and other traditional still life subjets as well as brightly colored candies, mixed drinks in stemware, musical instruments, antique jewelry and perfume bottles. His colors often move away from natural color to brightly pushed expressionistic hues. He uses textures both to define objects and as painting elements in themselves. 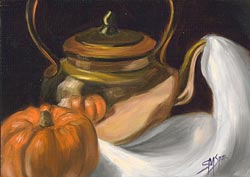 Susan Martin Spar has worked for 20 years in graphic arts, but her gallery style paintings reflect her interest in Dutch and Renaissance painting. Her A Painting a Day blog showcases her small daily paintings of still life and landscape subjects.

I particularly enjoy her fascination with reflective objects like vases, jugs and tureens whose metallic surfaces reflect fruit or other objects in her still life arrangements, or even an image of the artist herself, reflected as she paints. 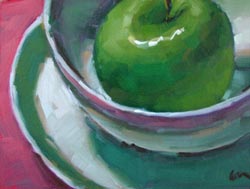 Texas based painter Carol Marine is a relative newcomer to the painting a day ranks, starting in October of this year with her blog Carol Marine’s Painting a Day. Her work stands out, however.

Her subjects are often the still life staples of fruit, dishes, jars and vases that lend themselves well to small immediate works, but her handling of them is striking, with strong painterly textures and bright, pastel-like colors, at times contained in Cezanne-like bits of outline. Her bold compositions and daring sense of color contrast make her a painter to watch. 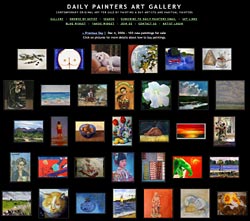 Blogger and painter Micah R. Condon is attempting to collect many of the Painting a Day bloggers’ images each day and aggregate them on his Daily Painters Gallery, which features small images from each of the listed painters each day, linked to their sites. Condon also offers a Yahoo! Widget that displays the daily painters.

A Note: One paradigm I’m not fond of is the tendency for some painting a day artists to arrange their blog posts so that the link from the posted image is not directly to a larger image, but to their eBay store, from which you must often click on another preview image to get to the larger image. (Even Duane Keiser does this, but that doesn’t mean it’s a good idea.)

A suggestion: if we have to go through that process every time we want to look at an image closer, we may get tired and click away to another site. You may also make people feel like you’re “pushing” them to buy. Have a clear “Click here to bid” or “Click here to buy” text link, but link the thumbnail to a larger image on your blog. Hook us with the full size image, then take us to the store.

More to come. I have many daily painters and not quite daily painters that I would like to feature on lines and colors, but these “painting a day” features are more work intensive than even my usually loquacious posts, so it may take a little while to get to them.

Addendum: After going back and forth with a few painting a day painters about my comments above, I’ll proffer the following advice to painters who are offering their paintings for sale on their blogs; take it as you will.

Supplement the image posted in the blog with a larger one. Offer clear and consistent text links to both the larger image and the purchase or bid link (eBay or whatever). Link the blog image itself to either (though I recommend the enlarged image). My thought about the size of the larger image would be to provide something that is large enough to see the painting in detail, but that can be viewed inside a browser window at the most common monitor resolution of 1024×768 without scrolling, i.e. a maximum of about 980×640.