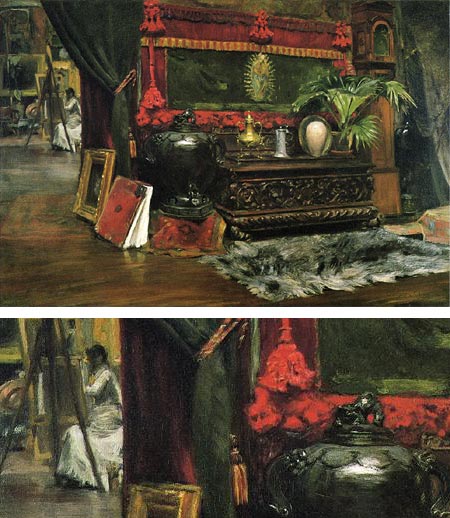 “The desire to draw was born in me.” said William Merritt Chase, in resistance to his father’s hope that he follow him into the women’s shoe business.

Born in Indiana, he trained with local artist Barton S.Hays and then at the National Adacemy of Design in New York. He moved to St. Louis and began his career painting still lifes. He became active in the St. Louis art community and, with the help of local patrons, traveled to Europe for two years, in return for paintings and the promise of helping the collectors acquire European art.

Chase studied there at the Academy of Fine Arts, Munich, a school that was attracting a number of Americans at the time, including Frank Duveneck. Chase traveled to Venice with Duveneck and John Henry Twatchman. On returning to the U.S. he began teaching at the Art Students League. He was perhaps the most noted art teacher of his time and also taught at the Brooklyn Art Association, the Pennsylvania Academy of the Fine Arts, and at two schools that he founded, the Shinnecock Summer School of Art and the New York School of art.

In addition to his work in oil, Chase was masterful in pastel and also worked in watercolor and produced etchings. He is renowned for his impressionist style landscapes of Prospect Park in Brooklyn and Central Park in New York, as well as a series painted in the summer sun at Shinnecock. He continued to paint still lifes and portraits throughout his career.

Chase is perhaps best known as founder and leader of the Society of American Artists, a group of avant-garde American artists who broke away from the conservative National Academy of Design in 1877. Members included J. Alden Weir, Albert Pinkham Ryder and John Henry Twatchman.

As is always the way, the avant-garde soon became the establishment and several of the Society’s members broke away to form a new group, the Ten American Painters, whose ranks included Weir and Twatchman along with major American painters like Childe Hassam, William Metcalf, Frank Benson, and Edmund Tarbell. Chase joined them when Twatchman died in 1902.

All of these painters were influenced by the dazzling explosion of French Impressionism. One of the things that I find particularly appealing about “American Impressionism” is that the American artists seemed less intent on making a complete break with the traditions of academic realism than their French counterparts. The result can often be a blurring of the lines between impressionist color and realist draftsmanship; and Chase is a prime example of this wonderful blend, as exemplified by the image above, A Corner of My Studio.