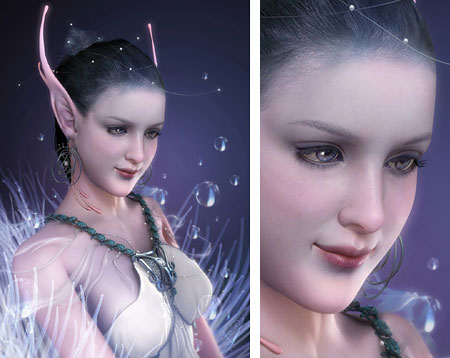 When I first saw this image, I assumed it was digital, but I also assumed it was an instance of digital painting (the use of a pressure-sensitive tablet and stylus to apply color in applications like Photoshop and Painter in a manner analogous to painting with traditional media). I was startled to find that, with the exception of a texture map painted in Photoshop and applied through a material editor, the image was created and rendered in 3-D CGI; in this case modeled in 3ds max 8 and rendered in the Brazil Rio rendering package.

3-D modeling has become very sophisticated in recent years, but still often suffers from a stiffness and artificiality except in the hands of the most adept 3-D artists. In the creation of high-resolution still images (as opposed to effects for film and TV), the depiction of faces and figures in particular suffer from this, and often are heavily painted into afterwards with Photoshop, producing a blend of 3-D rendering and digital painting.

Soa Lee is a Korean modeller and art director for game and animation companies. Lee started drawing traditionally and became interested in animation after seeing Katsushiro Otomo’s classic anime Akira. This led her to an introduction to digital animation tools and 3-D CGI (“Computer Graphics Imaging”). She has taken each step in the learning process as a challenge. Disturbed with that same artificiality common to 3-D that I mention, she was determined to learn to manipulate the rendering process well enough to overcome it and produce her final images as 3-D renderings, without having to do extensive touch-up in Photoshop.

The results are quite remarkable. Her fantasy-themed images have a feeling of fluidity and naturalism that isn’t often present in 3-D renderings. They also have a remarkable sense of detail, texture, lighting and motion. Their staging and composition reflect her knowledge of drawing (she still starts each piece with pencil sketches) and an eye to the principles of traditional painting.

Her site, soanala (roughly, “Soa’s World”) features some tutorials (in the Gallery section), and Imagine FX, the UK magazine about fantasy and digital art, did a feature article and a detailed tutorial about this image in particular in a recent issue (Christmas 2006). Her online gallery also has a selection of images in various categories. Some of the older ones still have that feeling of 3-D, but her more recent ones display her more finessed command of rendering.

Of particular interest is the “Myth” category, where you will find images from her recent Zodiac-inspired series that have a wonderful feeling of classical oil painting, notably the “Gemini” image, which reflects her admiration for the 19th Century Academic painter William Bougereau. You can find the larger version of the image above (“Ocean Nymph”) in the “Fantasy” section. (I can’t give you direct links because the site is in frames.)