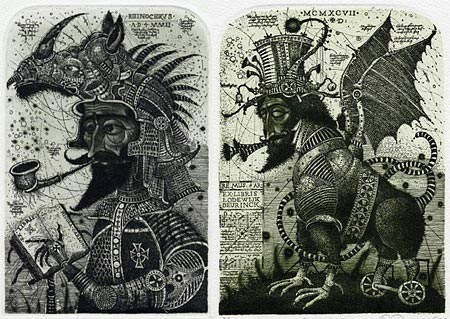 Sometimes artists can be self-consciously quirky in an attempt to be “different” and carve a niche for themselves. Other times, though, artists are simply quirky because the are. I think Ukrainian artist Oleg Denisenko falls into the latter category.

His delightfully bizarre prints of fantastical figures in elaborate armor, often sporting wings and accompanied by armored horses, arcane astrolabes, strange musical instruments, wheels, levers, charts and diagrams are filled with wonderful bits of texture and line. The monochromatic prints have a remarkable sense of being colorful because the variety of textures and line-filled areas have some of the same space-defining feeling as areas of color might in a painting.

Though the images carry a sense of medieval times, Denisenko was born in 1961.

His images spill over with objects from his mental and emotional attic. Wheeled toys, wind-up keys, jester hats, and Da Vinci-like diagrams for nonsensical Renaissance machinery mix with textured amalgams of dragons and birds.

Through it all is a wonderful graphic exuberance that makes you think that as soon as he stopped on one image, he would immediately begin the next just because he was having so much fun.