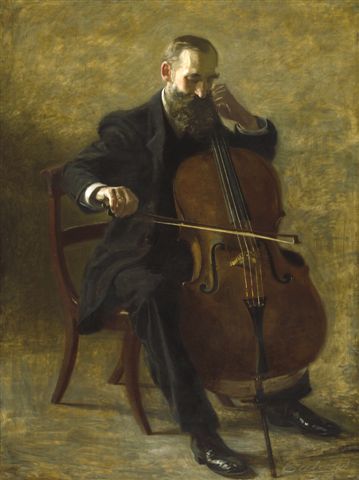 For background on this post, please see my previous post: Eakins’ The Gross Clinic – Held for Ransom?.

It looked as if the potentially tragic loss to Philadelphia of the Thomas Eakins materspiece by clandestine sale to Wal-Mart heiress Alice Walton, for her artificial island of culture in Arkansas, The Crystal Bridges Museum, was going to be avoided. Prompted by outrage among the local art community, city leaders and the ranks of their own students, teachers and alumni, Thomas Jefferson University’s board of directors agreed to delay their “get-capital-quick” scheme for long enough for other city institutions to cough up their ransom demands and raise $68 million to purchase the painting and keep it here in Philadelphia.

The Philadelphia Museum of Art and my old alma mater, the Pennsylvania Academy of the Fine Arts, where Eakins studied and taught (see my post on Thomas Eakins), sponsored a joint fund-raising campaign to allow The Gross Clinic to stay in the city and be jointly owned by the PMA and the Academy’s Museum of American Art.

Unfortunately, there is further fallout and the attempt to keep one great painting in the city has resulted the loss of another.

In order to meet the Jefferson board’s deadline, the museums arranged a loan through Wachovia bank to secure the painting. The fundraising campaign has fallen short, however, and has lost its momentum. The Academy may have stepped in a little over its head on this one, and has just announced the hasty and unfortunate sale of another great Eakins work, The Cello Player, to an unnamed private individual to help cover their share of the debt.

The Cello Player can be considered a “lesser work” than The Gross Clinic, which is one of the acknowledged masterpieces of American art, but it is a beautiful painting and is certainly the finest of the Academy’s three finished Eakins paintings. The purchaser has apparently promised to loan the painting back to the Academy for display to some degree, but there is no disclosure of who has bought the painting or where it will eventually go.

Herbert Riband, the vice chair of the board of the Academy has promised that the buyer is not Alice “I wanna buy me sum Kulture” Walton [my words, not his], but he also states the the Academy doesn’t know the identity of the purchaser and is making that statement on the word of an intermediary who is evidently brokering the sale.

For more interesting detail on the matter, see Lee Rosenbaum’s post on on the subject on her CultureGrrl blog (part of the Arts Journal site). Rosenbaum was on Radio Times with Marty Moss-Coane this morning on WHYY, the Public Radio affiliate here in Philadelphia (when you follow the link, filter for February 5, 2007, it’s in Hour 2). If you’re at all interested in the issue of the “de-acquisition” of works by museums and other public institutions, or this instance specifically, this program makes a fascinating listen. There are three guests, but Rosenbaum in particular is articulate and fascinating (makes me kind of wish she had her own radio show or podcast).

As Rosenbaum points out, this incident raises all kind of disturbing questions about who has the right to make these decisions about important works that are part of the cultural heritage of institutions and cities. Yes, museums “own” their works, except those on loan, and, barring stipulations made on gifts and bequests, can legally sell them; but these institutions exist partially on the basis of tax breaks and operating subsidies paid for with our tax dollars, (as well as our contributions) so in a real, as well as cultural sense, the public also “owns” these works.

To my mind, that’s one of the reasons we support our museums; so great paintings like The Gross Clinic and The Cello Player can be displayed in the cities where they have been a part of the cultural legacy for hundreds of years, and their fate is not left to the egotistical whims of priveledged megalomaniacs who need to make themselves feel cultured by robbing the treasures of other cities, or self-serving members of institutional boards (I’m talking about Jefferson’s board here, not the Academy’s) who treat those treasures like grist for expedient garage sales, simply because they’re too lazy to do actual work of fund raising.