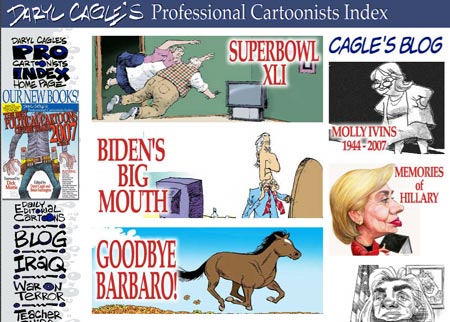 After yesterday’s rant I think I need some cartoons to lighten up, but I’m still feeling snarky enough to want some cartoons with bite, so lets head on over, as I often do, to Daryl Cagle’s Professional Cartoonist Index.

Cagles’s political cartoonists feature used to be on the venerable online magazine Slate, but has since moved over to MSNBC. Slate, meanwhile, has recovered by creating their own political cartoon feature that is very similar in format to the one Cagle established.

You may actually find the Slate version easier to deal with. The design of Cagle’s site, unfortunately, is incredibly busy, with banners and lists and ads trying to crowd each other off of every page, but it’s much more full-featured than the Slate cartoon section, and with a little perseverance you can find lots of great stuff.

The home page acts a jumping off point for viewing recent cartoons from a number of cartoonists arranged by topic. This is really the highlight of the site and you can waste, er, spend a lot of time here, fascinated not only by the cartoons themselves, but by the comparison of how various cartoonists have tackled the same topic on the same day. At times there can be uncanny similarities between several of them, not because of plagiarism, I think that’s actually rare, but simply because some ideas are just “naturals” and suggest themselves readily in the context of a given situation. You’ll also find interesting variety and strong opinions from both sides of the political fence.

For real variety, check in on the “Political Cartoons” page, which features Cagle’s selection for the day’s top cartoons, regardless of topic. On the left side of the page is a long list of American editorial cartoonists. At the bottom of this page, past the banner ads and another chance to view the cartoons by topic, is a list of Canadian and worldwide cartoonists. Like reading newspapers from England, Austraila, France and other places around the globe, viewing political cartoons from other countries can be eye opening. It’s astonishing how insular and self-consumed we can be in America. The rest of the world seems much more aware of what’s going on in the world as a whole. We seem oblivious to anything that doesn’t involve us directly.

Cagle is himself a cartoonist and his own work is usually featured on this page. Cagle maintains a blog, Daryl Cagle’s Cartoon Weblog, which you may have seen listed on the lines and colors blogroll. It focuses, logically enough, on editorial cartooning.

There is also a page on the site where you can order reprints of political cartoons for a fee, searchable through an extensive database. There is a Teacher Guide, accessible from a link on the home page, that provides lesson plans for using political cartoons in classes on Social Sciences, Art, Journalism and English.

Back on the home page, in addition to the long row of topic highlights running down the right side, and the extensive text list of further topics at page bottom, there is a set of “Year in Review” links on the left. These gives you access to collections of cartoons that let you re-live your favorite debacles, disasters and diabolical deeds from recent years.