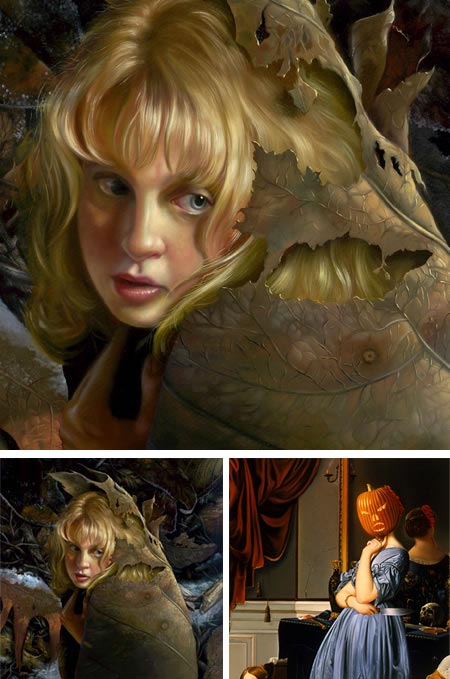 David M. Bowers started his career as a studio staff artist, transitioned into illustration and then into gallery painting. He has been splitting his time between illustration and his personal work and is now concentrating more on the later.

Over the course of his successful illustration career he has received a number of awards from the Society of Illustrators, including a Gold Medal, several Silver Medals and a “Best of Show”, and has been featured in Communication Arts and the Spectrum fantastic art collections (for which the image above, left and detail, top, was chosen as the cover for last year’s Spectrum 12).

Two of his paintings for Time magazine covers are in the permanent collection of the National Portrait Gallery.

His beautifully refined oil paintings carry the feeling of Renaissance and Baroque masters, imbued with layers of implied meaning and spiced with imaginative imagery characteristic of the symbolists and surrealists.

His carefully composed and subtly lighted images can appear almost starkly realistic at times, but there always seems to be an undercurrent of meaning, or a suggestion that something is not as it seems, like his scene of normal looking patrons at an apparently ordinary bar, that just happens to have Vermeer’s Girl with a Pearl Earring hanging on the wall between the beer signs. At other times Bowers’ images can be overtly fantastic, and are sometimes wickedly funny, like his wonderful pumpkin headed version of Ingres’ portrait of Comtesse d’Haussonville (image above, right).

Bowers’ painting technique is very much in the classical tradition. He devotes a page on his site to describing of his painstaking painting process, which I’ll attempt to summarize here because it makes a nice brief account of the traditional academic painting techniques that have been handed down since the Renaissance.

He starts with a ground of real gesso, prepared with rabbit skin glue, chalk and zinc (as opposed to acrylic “gesso” which should more properly be called acrylic primer and is not actually the best surface for oil based paint). Rabbit skin glue smells terrible, has to be heated up in a double-boiler pan, takes a lot of time an effort and is a PITA to work with, but it actually sizes the canvas, and, properly primed, makes a superior surface for painting.

He then paints a monochromatic underpainting, which separates the painting of value from color, as has been tradition since oil painting was first in common use (see my post on Jan van Eyck). Bowers paints his underpainting in earth colors. The greenish cast of the burnt umber in the skin areas is reinforced with a transparent layer of green. This is a traditional Renaissance technique that gives the final reddish skin tones variation, depth and strength. Similarly, a green tree will have a reddish undercolor.

He then layers in the final colors, working carefully from background to foreground, finally applying layers of translucent glazes, sanding the layers as they dry with pumice stone powder. The final painting is sanded again and varnished to bring out the luster and depth of the glazes. This meticulous process has yielded results for generations of painters and it serves Bowers well.

When viewing the paintings in the galleries and Exhibitions sections of his site, don’t miss the Prints section, which includes detail images.

One Reply to “David M. Bowers”