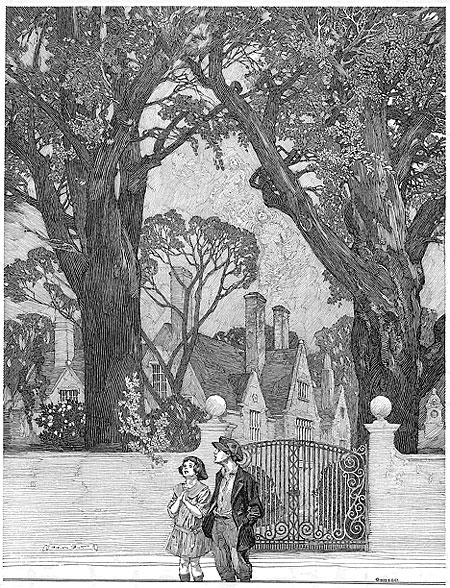 Franklin Booth owed his amazing style of pen and ink drawing to ignorance.

Booth was one of the greatest American illustrators and one of the absolute masters of pen and ink drawing. His style was the result of an isolated childhood on an Indiana farm and an innocent ignorance of the printing technology of his time. 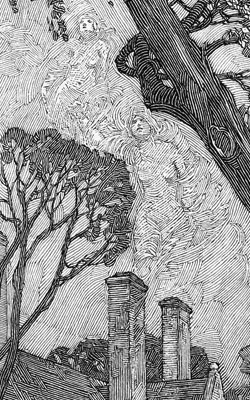 In the process of unknowingly emulating the engravers’ intricate lines, Booth created a unique style of pen drawing that has since been imitated but never matched.

His drawings are marvels of tone created in line. The textures of the world, faces, clothing, atmospheric effects, sweeping skies, roiling clouds, the vibrance of forests and fields, are created from thousands of precisely placed pen lines, spaced and arranged to blend in the eye into optical tones of grays. Actually, “tones” and “grays” don’t do Booth enough credit, his black and white drawings suggest colors in the the mind, in much the same way as Van Gogh’s wonderfully textured drawings; or like the “colors” of the grays in Chinese ink painting. In fact, one of the books on Booth that I’ll recommend to you is subtitled “Painter with a Pen”.

The extraordinary power and visual force of Booth’s works were a dramatic influence on his contemporary Golden Age illustrators like Howard Pyle, 20th century artists and illustrators like Virgil Finlay, Roy Krenkel and Frank Frazetta, classic comic strip artists like Hal Foster and Alex Raymond and modern comics artists like Berni Wrightson (whose amazing Frankenstein portfolio was a homage to Booth) and Frank Cho (who will occasionally devote a whole strip to one of his pastiches of Booth’s style) .

I’ve been on the web a long time and I’ve found that if you wait long enough, resources that didn’t exist will eventually be posted. I’m still a little disappointed, though, with the small amount of online resources for brilliant artists like Franklin Booth, particularly considering that his work is in the public domain.

That being said, I have been able to dig up a few web resources for you, and, more importantly, a couple of absolutely terrific print resources. I say more importantly because to really appreciate Booth’s precise lines, magnificent scope and astonishing level of detail, you need to see his drawings in the high-resolution of print rather than the low resolution of screen images.

When I first discovered Booth, I went crazy trying to find his work in print and was sad to discover that the only major book of his work, Franklin Booth: 60 Drawings, and the Nostalgia Press reprint of it from the 70’s as The Art of Franklin Booth, were both out of print and expensive on the rare book market; but you (you luck devils) now have access to two recent, and absolutely great, collections of his drawings.

The first, Franklin Booth: Painter with a Pen from Flesk Publications, is temporarily out of print, but will be reprinted this July. The other is Franklin Booth: American Illustrator, a new release from Auad Publishing, which includes some of Booth’s rarely seen color illustrations.

There are Booth galleries on the Flesk site, and the Auad site, though the images on both are too small to get a real feeling for how amazing his drawings are when seen on the printed page. Both of the books are very reasonably priced and I can’t recommend them highly enough to anyone interested in just how amazing pen and ink illustration can be.