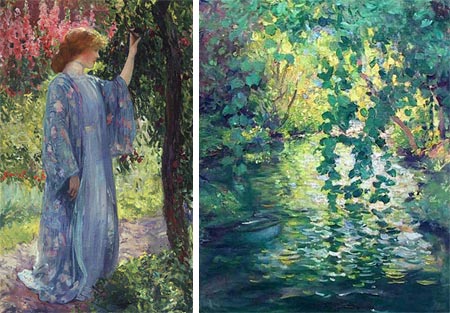 The influence of the radical modern art movement known as Impressionism came to the U.S in two waves. The first, logically enough, crested on the east coast and produced a number of remarkable American painters, many of whom were in a group of artists in New York and Boston known as “The Ten American Painters”, while others, like Daniel Garber, were centered around an artists colony in New Hope, just north of Philadelphia, and became known as Pennsylvania Impressionists.

In the second, slightly later wave, around the turn of the 20th Century, the influence spread to California, a part of the country that was still remote and difficult reach at the time. (The Transcontinental Railroad wasn’t completed until 1869, and the line connecting Los Angeles to Chicago was finished in 1885, leading to an influx of people, including artists, in the 1880’s.) Artists like Hanson Puthuff settled in California and found it an ideal place to practice the new school if plein air painting that was blossoming out of the influence of the Impressionists.

Guy Orlando Rose, one of the most prominent of the painters who became known as California Impressionists, was California born, but like many of his transplanted and Eastern counterparts, traveled to Europe to study at the Academie Julian; and he was the first artist from California to receive honorable mention at the influential Paris Salon.

After returning to the States, he fell victim to one of the occupational hazards of using oil paint at the time and suffered from lead poisoning (oil paints in that day were largely based on lead white), which forced him to refrain from painting for extended periods. During one of those periods he lived in New York for several years, taught drawing and portraiture at Pratt Institute and created illustrations for magazines like Harper’s, Scribner’s and Century.

In 1899, his health restored to the point where he could once again use oil paint, he returned to France with his wife, who was also an artist, and settled in Giverny, where an artist’s colony had sprung up around the imposing figure of Claude Monet. Unlike many of the artists there, Rose actually became a friend and protogé of Monet, and his work shows that influence more than any other artist in the group known as “American Impressionists”. He also adapted Monet’s practice of painting the same scene repeatedly, at different times of day, to capture the fleeting effects of changing light.

Rose eventually returned to California, where he taught and was director of the Strickney School of Art in Pasadena, and continued to paint until brought down by the continued effects of lead poisoning and a stroke. Rose is widely considered one of the best of the American Impressionist painters and is perhaps the most true to the French Impressionist style among them.

Unfortunately the only book I know of specifically on Rose, Guy Rose: American impressionist by Will South, is out of print, but you may be able to find copies through Amazon and other used book sources. You will find him mentioned prominently in books like California Impressionists, by Susan Landaurer.