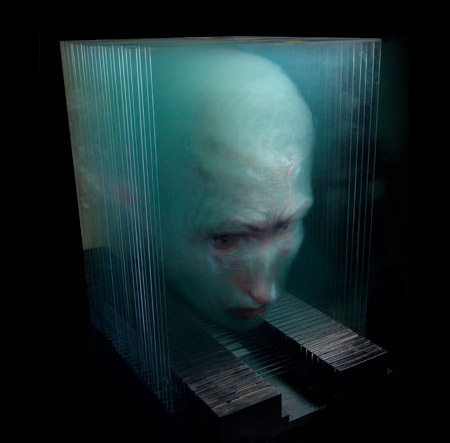 You may occasionally hear me refer to 3-D in the sense of 3-D CGI, the creation of two dimensional images based on three dimensional computer models; but there’s another aspect of 3-D in relation to art, the perception of images in 3-D.

Holography has been used in gallery art for a number of years; and, as technologies advance, the three-dimensional perception of images is coming to the fore in other ways. The new Disney animated feature, Meet the Robinsons, is being shown in certain theaters using a new, sophisticated screen and projection technology for 3-D (a 3-D CGi movie being shown in 3-D); and the word is that DreamWorks Animation SKG may start releasing only 3-D movies as of 2009.

It is a natural part of the way we perceive the world and, if you think about it, the real appeal of sculpture is in the three dimensional perception of its form, photographs of sculpture always feel flat to me.

That being said, here’s an artist walking an interesting line (puns are popping up everywhere in this post) between drawing and sculpture. Xia Xiaowan creates objects that could be considered either.

Drawing with a “special pencil” (the gallery’s description) on tinted glass, Xiaowan constructs images that feel three dimensional by the arrangement of a sequence of images (usually 14) stacked in a spatial arrangement that allows them to act almost like an analog hologram (above). 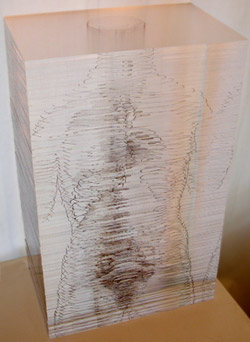 My comment about sculpture holds true here, though, in that I would really enjoy seeing these in a sequence of photographs taken from different angles or, even better, an animation or video. Short of that, you can view individual pieces that have been photographed from different angles and get an idea of the dimensionality of the works.

There is another artist named Mariléne Oliver who is working in a related fashion, producing inkjet-rendered drawings on pieces of clear material that are stacked, usually vertically, displaying, in effect, a three-dimensional drawing within them, like her 3-D deconstruction of the famous anatomical drawing by Leonardo that has come to be called “The Great Lady” (left), shown here in process on the Royal College of Art site.