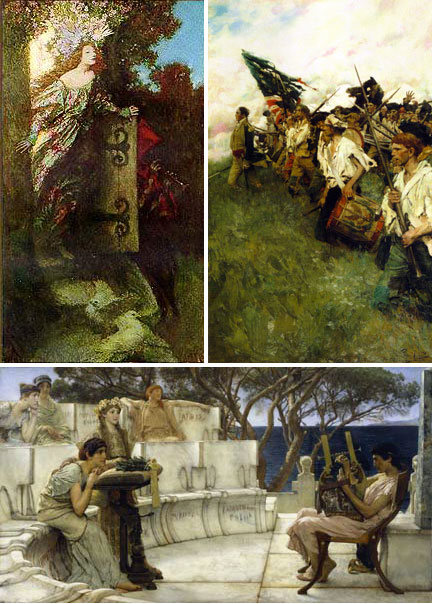 In 1876 the Centennial Exposition (officially the “International Exhibition of Arts, Manufactures and Products of the Soil and Mine”) was held here in Philadelphia, where the Declaration of Independence had been signed 100 years earlier.

It was the first major World’s Fair to be held in the United States and served as announcement of the nation’s emergence as a major industrial world power. The exhibition was also announcement of the new nation flexing its cultural muscles, and the exhibit of American art that accompanied it must have been something to see.

It was around this time that a number of American artists and architects, among them the great illustrator and teacher Howard Pyle, come to feel that not only was American art coming into its own, but that it had matured enough to inherit the mantle of the great traditions of the European Renaissance and classical antiquity.

Though the artists themselves used it for awhile, the term “American Renaissance” isn’t in common use these days. The period isn’t widely recognized as a coherent art movement, and you won’t find more than cursory mentions of it in most sources. In fact, if you search for the phrase “American Renaissance” on the web, you’ll find more references to a literary movement earlier in the Century.

Pyle felt that painting, and illustration in particular, could have a civilizing influence on large numbers of people, and it was within his fascination with the classical ideals that he emphasized history painting. In his case, of course, it was not European history that he portrayed, but the history of his own nation. Pyle became renowned for his paintings of the American Revolution. His ideas influenced his students, who included many of the greatest American illustrators.

The Brandywine River Museum, a gem of a small museum in Chadds Ford, Pennsylvania, where Pyle taught his classes in the summer, and not far from Wilmington, Delaware, where Pyle was born and had his studio, has picked up this theme for a wonderful exhibition called “Howard Pyle and the American Renaissance”, with works by Pyle and many of his contemporaries who were influenced by this ideal.

The show features many seldom seen Pyles, like his illustrations for Quo Vadis, as well as many of the best from the collections of the Brandywine and the Delaware Art Museum, which houses the single largest collection of his work; and includes a newly acquired painting, Richard de Bury Tutoring Young Edward III, jointly purchased by the two museums.

Other artists represented in the exhibition include Edwin Austin Abbey, Joseph Clement Cole, Augustus Saint-Gaudens and Kenyon Cox. The N.C. Wyeth illustrations that are the stars of the museum’s collection have been temporarily replaced by his infrequently displayed landscapes. The exhibit includes European and English artists who influenced the Americans; among them is Sir Lawrence Alma-Tadema, whose beautiful “Sappho and Alcaeus” (image above, bottom) is on loan from the Walters Art Museum in Baltimore.

If you’re fortunate enough to catch the exhibition, which runs until May 20th, 2007, don’t miss another exhibit of American Illustration, on display in a separate gallery that is not well marked (straight ahead as you leave the Pyle exhibition).

Here are some web links for Howard Pyle; there are additional links on my earlier post about Pyle.

2 Replies to “Howard Pyle and the American Renaissance”