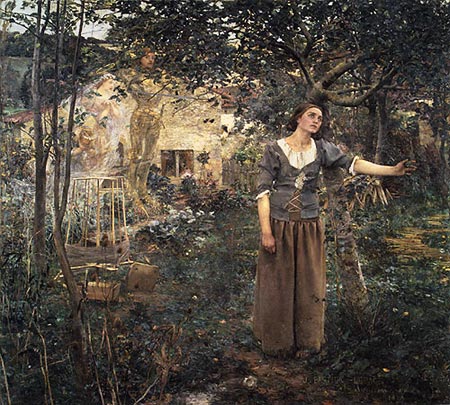 19th Century French painter Jules Bastien-Lepage had a short life. He first gained notice in the Salon as a painter of rural life, a theme to which he would return later in his career. His most noted painting during his lifetime was perhaps a portrait of Sarah Bernhardt, which won him the cross of the Leigon of Honor.

Today, however, those who have an appreciation for late 19th Century Academic painting are most likely to focus on his image of “Joan of Arc” (sometimes called “Joan of Arc Hearing Voices” – image above), the original of which is in the Metropolitan Museum of Art in New York.

The painting is quite large at almost nine feet to a side (100×110 inches or 254x279cm), and is striking when you stand in front of it. Bastien has chosen to bathe the young Joan’s moment of revelation from the voices in a soft, even light, making the highest contrast that of her bare arms and upturned face, and the light wall of her parents’ cottage, which serves as a stage against which the tableaux of the three saints can be seen.

The images of the saints are subtle and you only see them after fully registering Joan’s figure, which is painted with a palpable sense of realism. The rest of the scene emerges from the tangle of fruit tree branches and saplings. The effect is that the painting unfolds for you in layers, transitioning gradually from a peasant girl in a garden to the transcendent moment of inspiration for the national heroine of France.

Bastien’s command of rural subjects came from his upbringing in a small village. He used an apple tree in his grandfather’s garden for the tree in in “Joan of Arc”, and based the cottage on his family’s barn. Jeff Patterson has written an interesting article on this painting.

Bastien shows a similar command of the subtleties of diffuse lighting and tonal contrast in his other work, as in this painting of a young peasant girl.

He based his realism on an appreciation for nature as it is, and his painting and philosophy had an effect on the plein air painters of the late 19th Century, including the American painter J. Alden Weir and Spanish realist Joaquin Sorolla y Bastida. It’s also interesting to note that Bastien himself reportedly was particularly inspired by Jan van Eyck.

The artist’s career was hampered by ill-health and his life was cut short in 1884 at the age of 36.