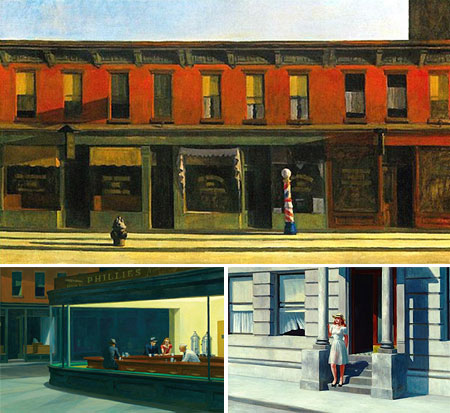 Edward Hopper found stillness in motion and geometry in light. His simultaneously strong and subtle images of houses, streets and intimate rooms invite us to quiet our minds and open our eyes to the beauty of the commonplace as revealed by shadow, sun and the warmth or artificial lights.

Hopper takes us down city streets, past rows of shops waiting to open, into cafes and diners, past intimate scenes on porches and stoops and lets us peer voyeuristically into windows. He doesn’t just leave us in front of his images, he guides our eye, saying look, look how the shadows show you this form, look how the sunlight makes this space reveal itself, look at the inside and the outside of this architectural form at the same time. Look.

Hopper takes particular delight in showing us windows, all manner of windows, from the inside looking out, whether from quiet cafes or intimate bedrooms, or from the outside looking in, particularly in night scenes where the inside reveals itself more brightly in the surrounding darkness, or even in his famous Nighthawks diner scene where outside and inside are separated more by the presence of light than by the physical barrier of glass.

Hopper’s technique is deceptively simple, There is no great flourish of painterly display, or dazzling realist detail, he paints directly, almost brusquely, with little regard for anything but conveying the scene and, in particular, the geometry of the scene, all of the planes and angles and intersecting forms. Even his images of people are geometrically composed. A friend of mine recently remarked that Hopper paints his people exactly the same way he paints his architecture.

This becomes particularly apparent in an image like Summertime, in the collection of The Delaware Art Museum (above, lower right), in which the young woman almost appears to be part of the building, her red skin mirrored by the reds in the doorway, her white dress matching the facade of the building and its columns, and the translucent folds of which are echoes of the windblown curtains in the open window.

I think geometry is the key, whether Hopper ever thought of it that way or not, geometry, and his deep, vibrant colors, give his quiet paintings of unassuming scenes a remarkable strength.

Hopper started his career with a correspondence course with the Correspondence School of Illustrating in 1900. He later attended the New York School of Art, where he studied with William Merrit Chase, Robert Henri and Kenneth Hayes Miller. He supported himself for many years as an illustrator, but was not satisfied with that field and kept pursuing gallery representation unsuccessfully until the age of 40. Since then he has become one of the major figures of American art and his work has been the subject of major exhibitions at the Museum of Modern Art and the Whitney.

There is a terrific opportunity for those on the Boston, D.C. and Chicago areas to see major retrospective of Hopper’s work this year and next. The show, simply titled “Edward Hopper”, is at the Museum of Fine Arts, Boston, from now to August 19, 2007. It then moves to the National Gallery of Art in Washington D.C., where I hope to see it, for a run from September 16, 2007 to January 21, 2008, and finishes at the Art Institute of Chicago from February 16 to May 11, 2008.

The Museum of Fine Arts, Boston has a special feature devoted to the exhibit that includes an interactive tour of some of the works in the exhibition, though the images are small.

For a better overview of Hopper’s work on the web, try Bert Christensen’s Cyberspace Gallery, Art Renewal Center, or the other resources I’ve gathered for you below. Art Renewal probably has the largest reproductions, and perhaps the greatest number, as well as including some of Hopper’s etchings, but the color in their images of the paintings often look off to my eye. The reproductions in Bert Christensen’s Cyberspace Gallery are smaller, but their color is truer and he presents a nice selection.

Hopper, who struggled for years to sell a painting, is one of the most popular American artists and there are numerous reproductions and books of his work.