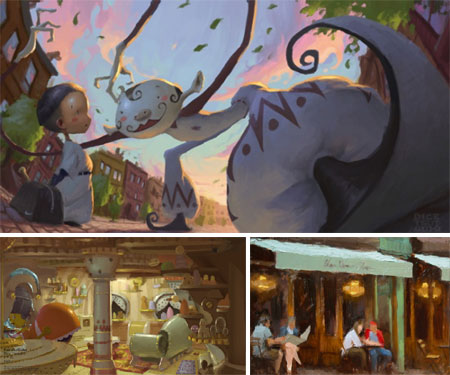 I could have done a post on Daisuke Tsutsumi in any of several different genres of artwork — illustration, comics, painting or movie concept art. Though his primary occupation is as a film concept artist, Tsutsumi, or “Dice” as he is called, continues to pursue his interest in the other forms.

As a concept artist, he has worked on films like Ice Age, Robots (image above, lower left), and the upcoming Horton Hears a Who. It was his illustration work that first caught my eye when I came across the image at top in the Spectrum 13 collection of contemporary fantastic art. I then noticed that he has done a graphic story called Noche Y Dia as a part of the Out of Picture anthology (preview here) that is being published by Villard, the same division of Random House that is publishing the Flight comics anthologies.

I subsequently checked out the Film section of his site, which contains his concept art, and was eventually surprised and delighted to find that Tsutsumi is an avid plein air painter. His painting section contains many oil sketches done on location, of which I’m particularly fond of the series from the Village in NY (image above, lower right), and you will also find on location paintings in the Trip section, done during his travels to Europe and South America.

Through all of his work, you will find a strong color sense, even when his work takes on a monochromatic character, and an interesting range of approaches to value, from high contrast to low. Tsutsumi works digitally for his concept art and in oil and watercolor for his location paintings. There are also ink sketches, and mixtures of medium employed in his continued exploration of approaches and genres.