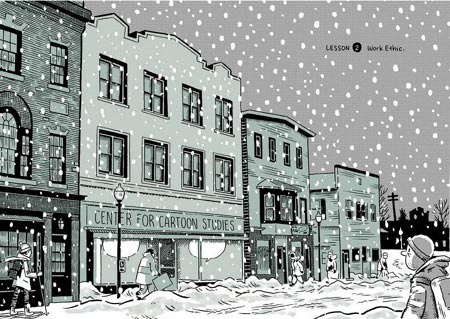 Cartooning and comic book creation have been working their way into the curriculums of mainstream colleges and universities, and there are now two (as far as I know) schools devoted entirely to the field.

Unlike the long-established Joe Kubert School of Cartoon and Graphic Art, a three-year school in New Jersey which concentrates on preparing its students to compete in the market for mainstream comic books and graphic design, the relatively new Center for Cartoon Studies in Vermont is a two-year school that focuses on preparing students for creating comics with an emphasis on the even riskier, but very worthwhile, path of independent creation and self-publishing, particularly in the “graphic novel” form.

The Center for Cartoon Studies was founded in 2004 by James Sturm, an award winning cartoonist noted for his series The Cereal Killings and his graphic novel The Golem’s Mighty Swing, which was named “Best Comic 2001” by Time magazine, and Michelle Ollie, who is experienced in the business side of art schools from her association with the Minneapolis College of Art and Design and the New York Institute of Technology.

There is an illustrated article by Sturm on Slate about the founding of the school. There in also an interesting recent article in the Christian Science Monitor that gives a nice overview of the school as well as a more personal picture of it from a student point of view.

Notice is expanding on the web and you can also find accounts of the Center from the point of view of students like Josie Whitmore (on Kochalkaholic), and visiting lecturers like Alec Longstreth. There is also a description of the center from Publisher’s Weekly.

The school offers a one-year and two year course of study that look as though they focus on grounding the student in some of the traditional basics necessary to understand and create effective works in the medium of comics, including some knowledge of graphic design and publishing.

The school has just released the first publication under it’s own auspices, Houdini: The Handcuff King by Sturm, Jason Lutes and Nick Bertozzi (more info here), the first in a series of graphic novels for young readers.

There is also a fascinating book called A Guidebook to The Center for Cartoon Studies by James Sturm and Kevin Huizenga, from which the image above has been cropped (review here on PopSyndicate), that serves as an introduction to the school and is, of course, in the form of a graphic story.

Addendum: Filmaker Tara Wray (â€Manhattan, Kansasâ€) is currently filming a documentary called Cartoon College, about a year in the life of the school. There is a trailer online on the Center’s web site.

6 Replies to “The Center for Cartoon Studies”