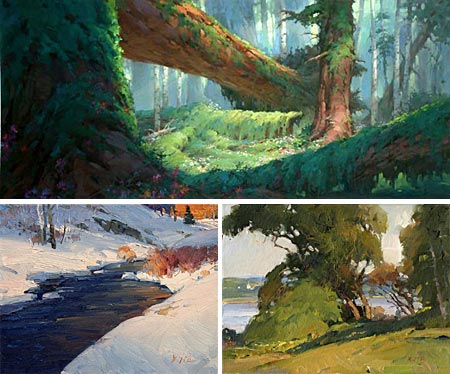 Xiangyuan Jie is a Chinese painter, born in Hunan province, now living in Florida. He originally studied theatre set design and graduated from the Central Academy of Drama in Beijing with a BFA in that specialty, to which, in a way, he would later come full circle as a background artist for animated films.

He taught for several years at Hunan University and then traveled and lectured in Europe as a visiting scholar. He eventually settled in the U.S., taught at Auburn University as a visiting professor and later studied and taught at the College of Architecture at Georgia Tech.

Somehow, his background eventually led him to working with the Disney Feature Animation Studio in Florida, where he has done concept and background art for features like Mulan, Tarzan, Lilo and Stitch and Brother Bear (image above, top) and Ice Age 2. Jie is also an accomplished plein air painter, painting in a wonderfully open and colorful style informed by the early work of Impressionist inspired painters from Europe, Russia and the U.S. (images above, bottom).

His web site, although it still says “coming soon” in several places, is at least partially functional and has a section for his gallery art and a section for film work, though the content of both is limited at the moment.

You can find much more of his visual development work on his Visual development art for films blog, including multiple versions of backgrounds, working sketches and color keys. His work for Brother Bear, in particular, was done in a fresh, painterly style that came out of his work painting real landscapes.

Jie also maintains a painting blog, Art of Xiangyuan Jie, on which he posts recent work, photos of plein air painting excursions and links to extensive web albums of his landscape paintings, portrait studies and commissioned portraits, in which you can see the influence of Sargent and perhaps Anders Zorn.

There is now a book available of Jie’s landscape paintings. Ordering information can be found on his blog.