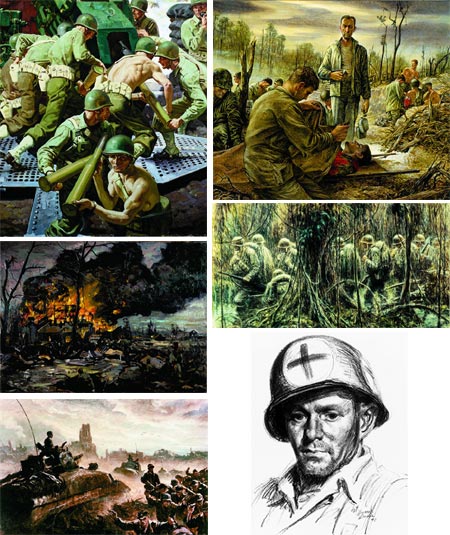 For those lines and colors readers who are outside the U.S., I’ll explain that today is Memorial Day, a national holiday associated with the start of Summer, picnics, bar-b-ques and mini-vacations. More importantly, though, it is a holiday designated as a remembrance of those who have died in military service; though moving the observance from a set date to a floating Monday has put the emphasis on holiday for most Americans, and unfortunately de-emphasized the importance of its original purpose as a day to honor the fallen.

I missed the PBS special They Drew Fire: Combat artists of World War II when it was broadcast in 2000. The documentary chronicles the role played by over 100 individuals who were considered “combat artists”, drawing and painting their experience of war from the field, most often from the front lines.

A few were journalists, working for publications like Life Magazine and included name artists like Peter Hurd. Most, though, were military personnel, some working for military magazines like Yank, but 42 were specifically commissioned according to a special program established in 1943; and apparently included Thomas Hart Benton, who was in the U.S. Navy.

You may think it odd that the US government would have the insight to realize the value of artistic vision over straightforward photography in conveying images of the war to those “fighting on the home front”, and the program was in fact torpedoed by a short sighted congress who eliminated its modest funding the next year; but the program was well-conceived and pulled no punches. The artists were instructed to portray war as they experienced it, covered in dirt and mud and blood, not the spit and polish of formal portraits.

Though the formal program had its funding yanked, many of the artists continued unofficially, and other efforts to report the war by way of combat artists started up, both civilian and smaller-scale military.

These artists were in the field. If landing on a beachhead, they were expected to fight like any other soldier until the beach was secured, then take up their pens and pencils and make sketches, usually to be rendered as finished paintings later under more secure circumstances. This was seen as one of the advantages of artists over photography, the photographer could only snap what was available to his lens at the moment, an artist was trained to form an impression, and could bring to bear control over lighting, composition and rendering to convey the feeling of combat perhaps more accurately in some ways than a photograph.

In many of the works available in the online gallery set up on the PBS site to accompany the documentary, you can see how effectively the artists have conveyed the realities of combat as they encountered them, the heroic effort, grim determination, wearyness, exhaustion and pain. (Images above, clockwise from top left: Robert Cornwell, Tom Lea, Kerr Eby, Howard Brodie, Ogden Pleissner, William Draper.) Bear in mind as you look through the gallery that these images are not the fantasies of movie or gaming concept artists, but a record of real experiences.

There is also a history of the combat art programs, and information on some of the individual artists. Not mentioned is the role of cartoonists like Bill Mauldin, and the fact that, though there is no formal combat artist program today that I know of, there are artists portraying the conflict in Iraq, like civilian Steve Mumford and reservist Chris Grant.

You might think it was odd that the government during World War II would allow the realities of war to be portrayed in anything other than a heroic, recruitment-poster fashion, particularly given the current government’s disgraceful refusal to even allow photographs of the flag-draped coffins when the fallen are returned from Iraq; but we were a country at war then, not merely a country that has sent its army to war. (If you want to know the difference, when’s the last time you were issued a gasoline rationing coupon, had your taxes raised, bought War Bonds or heard of civilian factories being converted to military use to support the war effort?)

I think if we accept a picture of war as some kind of heroic John Wayne fantasy, or swallow the simplistic “us vs. them” Rah-Rah! football game mentality that governments peddle, we do our fighting men and women a terrible disservice. Only in acknowledging the true horror that we have asked them to endure do we honor their level of sacrifice on our behalf.

The role of artists, as always, is to open our eyes to things we might not see otherwise.