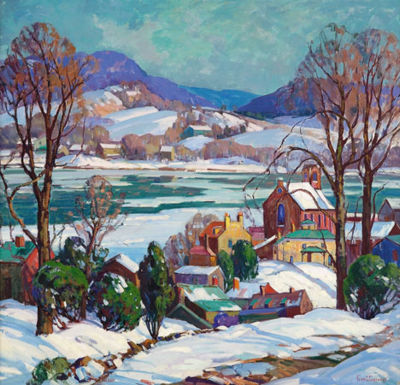 Now that summer has unofficially arrived, let’s look back as the quiet beauty of winter in the paintings of Fern Isabel Coppedge.

Coppedge was one of the group of painters centered around New Hope, a small town on the Delaware River in Easter Pennsylvania, around the turn of the 20th Century. These painters are collectively referred to as Pennsylvania Impressionists, and included such luminaries as Daniel Garber and Edward Redfield.

Coppedge was also a member of an official, though loosely tied, group called the “Philadelphia Ten“. This was a group of ten women artists who exhibited together, both in Philadelphia and in traveling exhibitions, most of whom had studied at the Philadelphia School of Design for Women (now the Moore College of Art and Design) or the Pennsylvania Academy of the Fine Arts.

Coppedge studied at both, as well as at the Art Students League in New York and the Art Institute of Chicago, in her native Illinois. It was at the Pennsylvania Academy, though, that she encountered Daniel Garber, who was likely one of her instructors, and introduced her to the New Hope group of painters.

She moved to New Hope and purchased a home near Garber’s. She became part of the group of New Hope painters but had one of the more independent and idiosyncratic voices among them. She shared their penchant for painting Bucks County winter landscapes and snow scenes, but showed a particular interest in village scenes with the small houses arrayed against hillsides like colored blocks.

She was not a “parlor” winter painter, painting winter scenes from the window of a heated room, but, like her compatriot Edward Redfield, would go out in all manner of weather, wearing a bearskin coat, ear muffs and gloves, painting until her fingers were stiff.

Though Coppedge was highly influenced by her fellow New Hope painters, she went very much her own way, developing a style that had more in common with post-Impressioninsts like Van Gogh than Monet or Pissaro. Her paintings have an element of primitivism that gives them a Rousseau-like strength and immediacy in which the normal rules of composition are ignored and almost every element in the painting has intense focus.

Objects often seemed outlined where she has filled a dark shape with brighter details, leaving the edges intentionally open to form a dark outline. Paint is at times placed on the canvas with large enthusiastic strokes, giving the impression of gleeful abandon to the joy of color and shape.

Coppedge developed a penchant for preternaturally bright colors, often using tube colors with little or no mixing on her central objects, giving them the highest possible chroma.

Her perspective is often flattened or askew, leading, along with her almost primitive use of color, to criticism that she was technically less the proficient than the other Bucks County painters. Though her output was weakened by inconsistency, her most “primitive” works, in which objects are most flattened into areas of color, come later in her career, as she was pushing forward into her own territory, and her early work shows a technical approach more in common with her New Hope colleagues.

Though I don’t know of any books specifically devoted to Coppedge’s work, she is included in collections like The Philadelphia Ten: A Women’s Artist Group 1917-1945 by Page Talbott and Patricia Tanis Sydney (out of print but available used), and the beautiful Pennsylvania Impressionism by Brian H. Peterson.