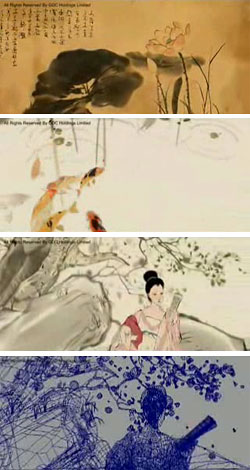 I stumbled across this little gem while browsing through painting tutorials on YouTube.

Ode to Summer is a beautiful little animation in which what appears to be a traditional Chinese ink painting comes to life. A dragonfly flits through lotus flowers, koi swim through graceful reeds below the rippled surface of a clear pond and a young woman sits amid calligraphically drawn rocks and reads us a brief poem extolling the beauty of summer.

At first you think one or two objects are being rendered in front of an actual ink painting, then the “camera” rotates and it becomes obvious that everything in the “painting”, including the calligraphy, is composed of 3-D CGI objects.

This is made even clearer at the end of the film when the authors reveal the wire mesh and textureless rendering stages of their objects briefly, and then let them resolve back into the “painting”, as if we’d gotten a brief glimpse under the skin of the Matrix.

The individual who posted the version I found on YouTube (it may be posted by others as well) didn’t include much info, and the film’s own credits are rather small. I had to do a little digging to find out that the person responsible for the film’s direction, story and look is Ron Hui, about whom I haven’t found much else. He is aided by a team whose names are also hard to read in the small screen.

It looks at though this was created or used to promote some rendering or shading software from RenderAid. Unfortunately the RenderAid site is “closed for rennovations” at the moment so I can’t check that out.

None of which affects the fact that this is a delightful little diversion for a Summer’s morning (even if we haven’t quite reached the solstice yet).

6 Replies to “Ode to Summer”