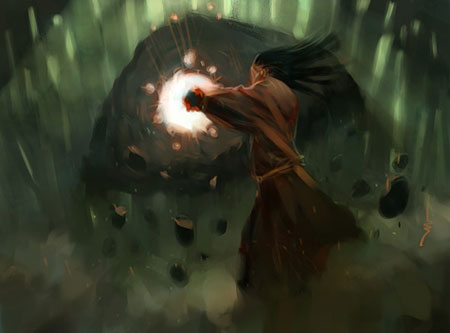 Laurent Beauvallet is a French illustrator and concept artist now living in England. He has worked on a number of well known collectable card games like Legend of the Five Rings (image above), Everquest, Warhammer40K and Star Wars, as well as console games like Nightmare Creatures, Galleon and Heavenly Sword.

His illustrations have appeared on the covers of numerous books, as well as magazines like Heavy Metal and have been featured in the Spectrum collections of contemporary fantastic art.

His web site includes galleries of his concept art and character design, sorted by project, and illustration, which includes book cover art, work for collectable card games as well as portraits, unpublished and personal work, life studies, gesture drawings and travel sketches. In addition, the Information page has a gallery of cover art at the bottom of the page.

Though his site doesn’t talk about process, it looks to me as though Beauvallet works primarily digitally for his professional work, but he achieves a nice painterly look of brushstrokes and blending. His images look unfussed with, as though the first strokes were left in place, giving them a nice fresh feeling. He will often create compositions that are almost monochromatic except for the main characters. He appears to work with traditional drawing media for life studies and sketching.

Beauvallet also maintains a blog called parvo beati (meaning “happy with little”), which includes more of his quick sketches from life. There is an interview with the artist in a recent issue of 2d Artist, the PDF magazine. You can download the interview as a separate PDF.