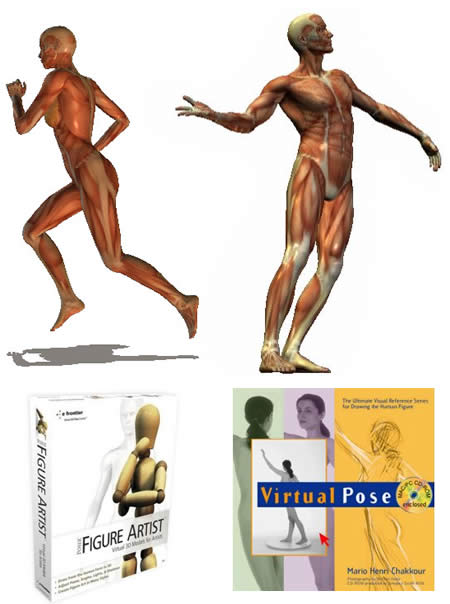 Most artists who are involved in inventing figures have seen, and probably used, manikins, posable wooden figures about the size of Barbie dolls, that can be used as stand-ins for live models or photographic reference.

The basic wooden manikins never seem to move far enough, and the shapes are pretty rudimentary, but there are now more sophisticated versions, like these from Art S. Buck, that look more look actual human figures, male and female, and are articulated more fully. You can even get them for drawing animals.

Several years ago, a computer program called Poser was created to act as a virtual artist’s manikin. Poser has since developed into a consumer-level app for rendering figures in digital compositions, and is overkill for the original purpose as a virtual manikin, but eFrontier has come out with a less expensive version called Poser Figure Artist (Amazon link) just for that purpose (image above, bottom, left).

You’re still talking about $80 or so, inexpensive if you use it a lot, but a bit much for a casual user who just wants to sketch the figure in various poses once in a while, without hiring a model or going through tons of photographic reference looking for a particular pose.

Enter Pose Maniacs, a Japanese web site in which a series of images have been posted (and continue to be added to) of virtual figures in a number of positions. The figures, both male and female, are rendered with superficial musculature visible, which both helps in learning anatomy and neatly sidesteps any questions of propriety (image above, top).

Most of them are 3-D spins that you can turn on an axis by dragging your mouse; others are animated sequences that you can click and drag to cycle forward or backward, enabling you to look for a pose as close as possible to what you need.

The site is largely in Japanese, but there are some alternate words in English, particularly in the navigation at the top left or the pages, and the links under the poses that allow you to choose between opening them in the main window or as a pop-up. You can see all Poses, sort by Tags or Topics.

There is a featured pose of the day, a “30 Second Drawing” feature that gives you a sequence of poses that change every 30 seconds, sort of virtual croquis, a “Negative Space Drawing” that gives you a figure in silhouette, and a “Random Pose“, that you can click to advance to the next choice at your leisure.

This is a good site to bookmark and stop by to do a quick sketch every day, as well as a useful reference if you’re looking for a particular pose and don’t have the time or resources to set up your own manikin, virtual or otherwise.

If you want something more realistic, there are the Virtual Pose books, with photographs of actual models in a multitude of poses (image above, bottom right). The books include CD-ROMs of Quicktime VR files with 35 hi-res poses, in 36 views per pose, that can be rotated and zoomed. Amazon Links: Virtual Pose, Virtual Pose 2, Virtual Pose 3, Virtual Pose Duo.

[Addendum, 2012: Poser has been bought by Smith Micro
and is now aimed at 3-D modelers and is overkill for this. As far as I can tell Poser Figure Artist has been discontinued, though you may be able to find old copies. I don’t know how compatible it will be with current operating systems.

As aln alternative, you may want to check out DAZ 3D, a CGI figure modeling tool for which the basic software is usually available for free, as their profit comes from selling additional model and accessory packages.

Another good resource for figure drawing subjects is the online Figure Drawing Training Tool, which is free (supported by donations) and provides timed poses using photographs of both clothed and nude models.

Yet another is The Croquis Cafe, which serves up weekly videos of pose sessions consisting of one, two and five minute poses. You can also view the archives of previous sessions. The Croquis Cafe is provided by On Air Video, a video production company that features a line of arts and crafts instructional videos.

Depending on your choices, can be NSFW.]