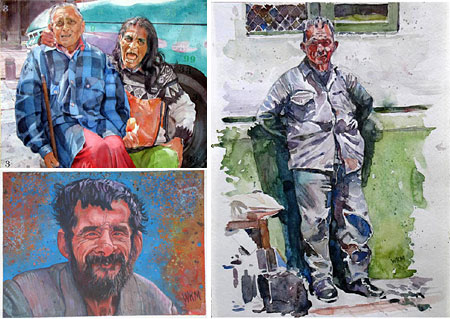 William K. Moore appears to live with a foot, and brush, in two worlds. Originally from Los Angeles, he has spent many years living in Bogota, Columbia and chronicling both cities in photographs and paintings.

His primary blog, Bogota Painter William K. Moore, is set up as a “painting a day” blog. In it he concentrates on paintings of the people living in the center of Bogota. He has a particular affection for those on whom financial fortune has not smiled, but who manage to find their way through life with a strength of character that Moore attempts to capture in paint.

Moore works in a variety of media, occasionally oil and acrylic, but most often watercolor and gouache. Occasionally he will list an interesting media mix like “watercolor and grime”. The area of the city he captures most often is an industrial section that provides lots of rough and gritty buildings and objects as backgrounds for his portraits.

He briefly gives the story of his interaction with his subjects, how he often works out some kind of payment in exchange for permission to photograph them, and sometimes describes their circumstances, creating in the process a visual and verbal picture of a city unknown to most Americans.

He also mixes in paintings of his native Los Angeles, which provide an interesting contrast to life in Bogota.

There is a gallery of Moore’s work assembled on the Daily Painters Gallery. He also maintains a Spanish language blog presence in Bogota, Bogotá según William Moore, and a blog of Bogota Documentary Photos.